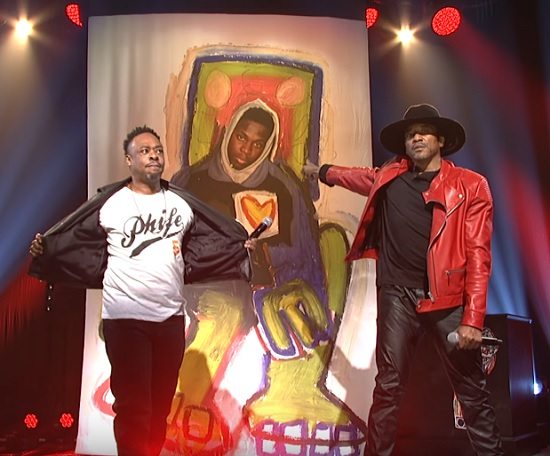 This weekend's edition of Saturday Night Live had the unenviable task of trying to bring laughter to a shell-shocked American audience after the unexpected results of last week's election. Luckily the show had two very strong aces up its sleeve: they somehow coaxed reclusive comedian Dave Chappelle back into the sketch comedy spotlight and they booked iconic hip-hop group A Tribe Called Quest as the episode's musical guest. While Chappelle brought the sardonic funny, Tribe didn't disappoint, delivering "We The People...." and "The Space Program" from their first album in 18 years, We got it from Here...Thank You 4 Your service.

"We The People...." came first, with group members Q-Tip, Jarobi White and Ali Shaheed Muhammad taking the red, white and black stage draped in leather jackets as the song's ominous bass line rocked Studio 8H. Q-Tip rocked through the political track with urgency as he expressed sentiments that concern all of us facing Trump's America come January while Ali Shaheed cut the track and Jarobi played hypeman. The shining moment of the number, however, happened when a mural of fallen member Phife Dawg dropped from the ceiling during the Five-Footer's fiery verse as Jarobi and Tip jammed along while they let the dearly departed have his say.

For "The Space Program," the group opened the track with their backs to the audience as Phife's voice urged the audience to get it together. After Tip's brief intro, we get to see Jarobi spit (which any Tribe fan knows is a rare sight). While that was a surprise in itself, the camera later panned to the audience to show Busta Rhymes and Consequence sitting with mics in the front row. They soon bumrushed the stage to represent with their homies as they implored the audience to make somethin' happen.

Though Phife's spirit was without a doubt missed, as a certain energy was absent in the crew's first television appearance since his passing, it was a rousing return for Tribe and a much-needed musical interlude for a trying week. Check out ATCQ representing for hip-hop on the SNL stage below.