A Tribe Called Quest Rallies ‘We The People’ In New Video 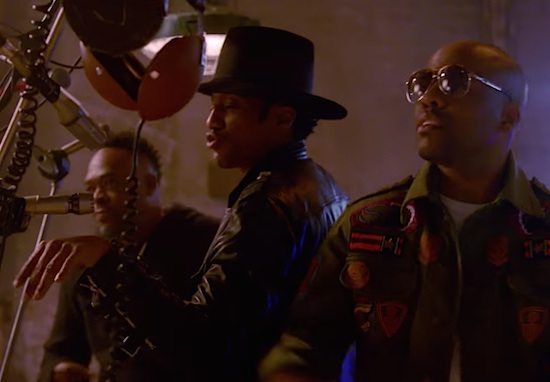 From the moment that A Tribe Called Quest dropped their latest and final album, We got it from Here...Thank You 4 Your service, one of the early favorites has easily been "We The People..." The song immediately struck a chord with hip-hop lovers because of its politically-charged message at a time when seemingly every minority in the country feels like we're walking around with a bullseye pinned to our chest. After dropping the song's lyric video last week and performing it live onstage during last week's Dave Chappelle-hosted episode of Saturday Night Live, the guys deliver an official video that is just what the doctor ordered during these weary and uncertain times.

The video opens up with various shots of New Yorkers going about their daily routines before panning to a shot of group frontman Q-Tip alone in a room surrounded by a gaggle of microphones. Eventually, we realize that he is using the mics to broadcast to the people around the city. It serves as a call-to-action as the people begin to converge upon a central location. Q-Tip, along with Jarobi White, Busta Rhymes and Consequence, urges everyone within earshot to mobilize. The rallying cry works as men, women and children immediately take heed, following a bundle of chords that leads them to their meeting spot.

The urgency of the message is conveyed as the crowd races towards their destination. Late member Phife Dawg appears in the video via a painted wall mural that animates and comes to life as he delivers his verse. While Ali Shaheed Muhammad makes a brief appearance via television monitors, he and Q-Tip never actually appear together. The clip ends with a wide shot of the thousands of people who have converged amongst numerous signs that read "We The People" before fading to black with the simple words "RIP PHIFE."

The video, the first official ATCQ video released since 1998's "Find a Way," shows the remaining members proving that they haven't lost a step in their ability to deliver thought-provoking visuals and lyrics. It also serves as a poignant and timely depiction of the times we are living in, as scores around the world have taken to the streets to protest the United States' new President-Elect. While it is still hard to come to grips with the fact that Tribe as we know it will never be again, it is at least comforting to know that they went out on their own terms, leaving us with some of their best material in the process.