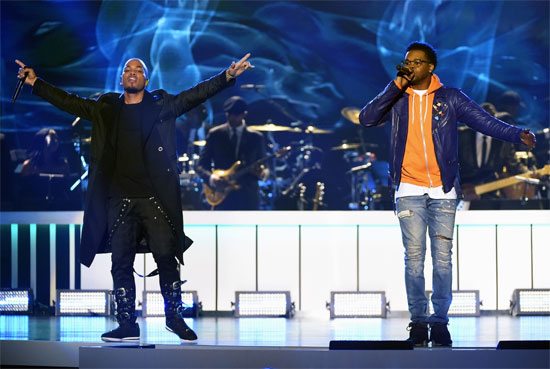 Representing the cool kids, R&B It guy Anderson .Paak and crooner BJ The Chicago Kid rolled up on the Soul Train Awards 2016 to perform their track "The Waters." Waltzing on stage to a jazzy rendition of the single, the artists fed off of each other's energy as they performed the track from .Paak's breakout 2016 release, Malibu. While quite a few curse words were censored from Anderson's performance, it still flowed pretty smoothly thanks to the BBE All-Stars led by musical director Adam Blackstone bringing the instrumentals to life. Anderson and BJ even walked into the crowd to make sure everyone was having as good a time as they were performing. BJ played the perfect wingman for .Paak, never upstaging him and giving the same level of upbeat energy with his signature vocals.

The performance served as the perfect introduction for viewers who still (somehow) are not familiar with Anderson .Paak. Right after the performance, he snagged the Centric Certified Award presented by Bobby Brown, Bell Biv DeVoe and stars of BET's upcoming New Edition biopic. After busting out some New Edition choreo to celebrate, Anderson said, "This is my first real award, that's heavy." This was a well-deserved award for one of the most hard-working performers of 2016. Watch .Paak and BJ bring their cool to the Soul Train Awards 2016 stage when it re-airs on BET Tuesday, November 29th, but you can catch .Paak's humble acceptance speech below.