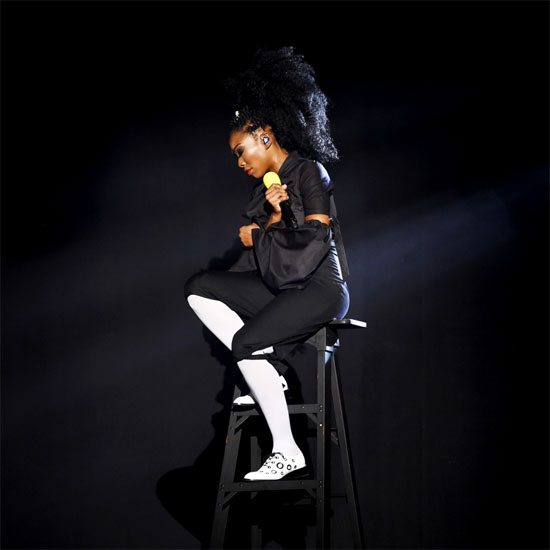 Though she's only 37 years old, Brandy is a 22-year music industry veteran and a living legend in her own right. Now, the "vocal bible" is finally getting her just due and was recognized by this year's Soul Train Awards with the esteemed Lady of Soul honor. Rather than have a bunch of up-and-coming young R&B starlets butchering her songs, B-Rocka took the stage to do her own damn tribute and show that this particular legend has a hell of a lot more to give.

Clad in mostly black save for an inexplicable pair of white knee-highs that made her look like she was auditioning for Hamilton, she kicked off with a rendition of "Almost Doesn't Count" while sitting on a stool above the stage. Soon, though, she was joined by dancers posing as backup singers as she rocked through her hits, just in case you needed receipts. After a brief flirtation with "Angel In Disguise," she did a fiery (and apparently uncensored) version of "What About Us" that segued into beloved cut "Full Moon." Then the familiar bass line of "Top Of the World" dropped in as Brandy and her dancers brought back the Bankhead Bounce. Then Ma$e strolled onto the stage in a full-length white mink (mind you, the awards were taped in Las Vegas, so you know he was beyond hot) to deliver his verse. B-Rocka then took the crowd back to '98 with her verse before revisiting '94 with smashes "Baby" and "I Wanna Be Down." A brief snippet of "The Boy Is Mine" then led her to the final song of her set, "Talk About Our Love," ending with Brandy standing triumphantly on stage as she silenced all the haters.

After that firework of a set, previous Lady of Soul honoree Jill Scott presented her with the award after a highlight reel featuring commentary from those she's touched during her career — including Babyface, Jhené Aiko and Jazmine Sullivan. Brandy, as gracious as ever, accepted the award with humility, thanking fans and peers alike for sticking with her through thick and thin. She more than deserved the honor and we can't wait to see where she goes from here.

Watch Brandy's incredible medley below, then check the Soul Train Awards feature and her Lady of Soul acceptance speech on the following pages.