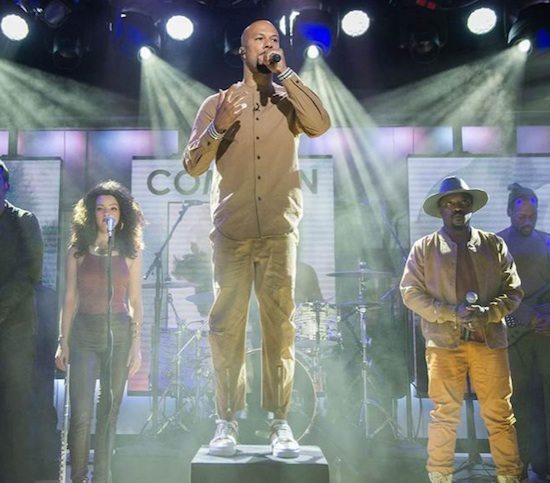 Today is release day for Common's new album Black America Again, and he decided to spend this morning on TODAY to perform one of the set's most searing songs. Black America Again is already proving to be Com's most politically charged work to date, and nowhere is that heard more than on the track "Letter to the Free," which was also featured in Ava DuVernay's excellent documentary about the 13th amendment and mass incarceration, 13th.

We've already seen Common and a band of all-stars perform this in the White House for NPR Music's Tiny Desk, but this morning he switched it up a bit for TODAY with the addition of Anthony Hamilton and The Hamiltones. Anthony took Bilal's place on the chorus and brought a different energy to the song altogether. Not to take anything away from Bilal, whose signature vocals set a haunting tone on the original, but Hamilton takes "Letter to the Free" to a more soulful level and goes full-on Negro spiritual by the end.

Adding to the sonic experience of this song was the visual of Common and Anthony switching places center stage by stepping up on a wooden block when it was time to deliver their lyrics. This subtle nod to a slave auction block was a stunning statement as it relates to this song, 13th and the new slavery of the prison system. Watch this brilliant performance right here, and add Common's Black America Again to your collections today with a purchase from Amazon, iTunes or Google Play.