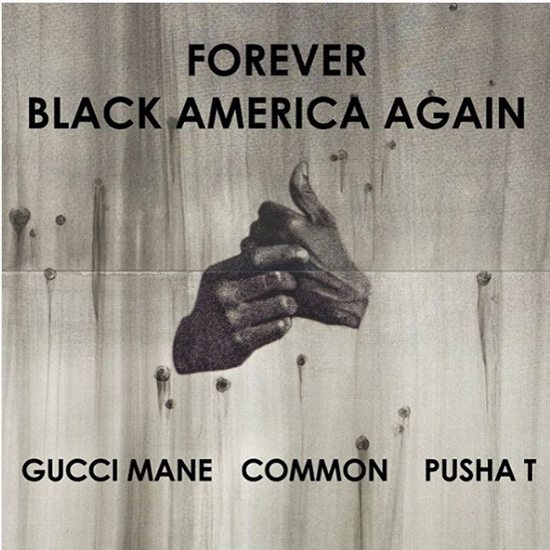 Common continues to make a statement with his latest LP, Black America Again. The conscious rapper/actor takes his title single "Black America Again" and adds a few new voices to create a remix that keeps on giving. The original single featured vocals from the legendary Stevie Wonder, and later got reworked into a Tonight Show performance with vocals from BJ The Chicago Kid. The latest version kicks it up a notch, adding Gucci Mane and Pusha T to the remix to share their take on social injustice among minorities.

Gucci takes the first pass rapping about his prison stint. "Woke up in a prison cell and I had a revelation / That my life's a testimony, I could be an inspiration / From the 6 to the Chi, I got so much in common / Gucci Mane and Common, did you see this coming?" BJ then chimes in with an updated chorus and Common opens the second verse with new lyrics about children in Zimbabwe and runaway slave to go along with the less solemn instrumentals. Pusha rounds out the track with witty lyrics rapping, "All these years later, we still the target / Look at Ferguson, Brooklyn and Charlotte / Sellin' CDs, reachin' for wallets / Trayvon'd be in his last year of college." BJ closes out the new single, singing "Black America" in his signature velvety tone that gives us hope and wills us to press repeat.

Milking "Black America Again" for what it's certainly worth, Common also released a stunning video and short film to accompany the track. Black America Again also features the likes of John Legend, Marsha Ambrosius, Bilal, The Internet's Syd tha Kyd and more. You can get your consciousness on when you cop the album on Amazon or iTunes or when you press play on Common and company's call to action in the remix for "Black America Again."