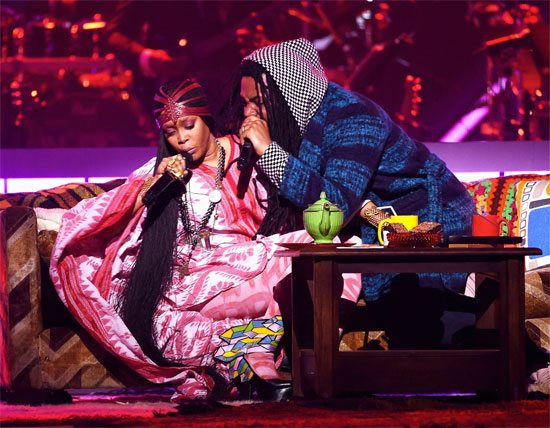 A song that we didn't expect to like but have ended up loving is "WiFi" by D.R.A.M. and Erykah Badu. The unlikely duo has provided us with a new Netflix and chill anthem to take with us into the winter, and they brought such a scene to life in their performance of the song on the Soul Train Awards 2016.

Badu took a break from her hosting and comic relief duties to welcome D.R.A.M. into her living room. The rapper/singer posted up on her couch, complete with throw pillows and an afghan to give authenticity, singing his verse. Badu soon came into view carrying a teapot before she sat down next to her guest to sing her part. Soon enough, we saw that D.R.A.M. wanted to get his hands on more than her wi-fi password as he cozied up to the green-eyed temptress.

There was a smidgen of caterwauling toward the end because the two singers weren't in harmony, but their onstage antics with D.R.A.M. acting like he was trying to jump Badu's bones distracted from his vocal shortcomings. See Erykah and D.R.A.M. get too close for comfort on the replay of the Soul Train Awards 2016 on Tuesday, November 29th at 6:30 p.m. ET, and look out for more from the pair with the announcement of a collaborative EP on the way in 2017.