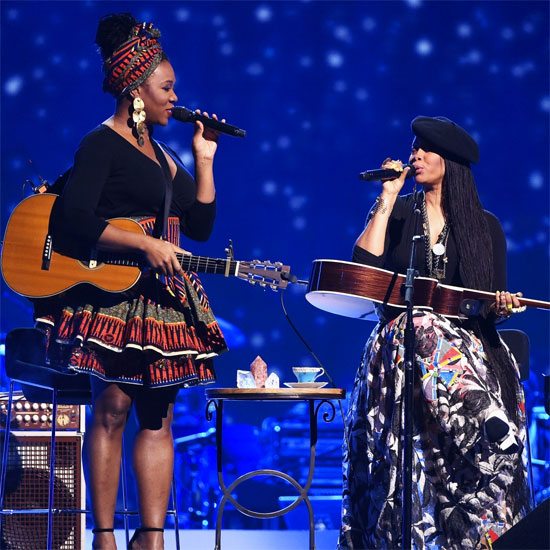 As the host of the Soul Train Awards 2016, the multi-talented Erykah Badu wore many hats -- performer, comedian, producer, writer and Kool-aid sweetener. However, one of the highlights was when she put on her “sister-in-soul” headwrap and performed with India.Arie and let all the facets of her personality shine while giving Ms. Arie a strong platform for her song, “Breathe.”

The set began with a quirky skit of Erykah performing acoustic trap soul versions of ratchet classics Snoop Dogg’s“Ain’t No Fun” and Juvenile’s “Back That Azz Up.” Unfortunately, India wasn’t down to drop low for the “99 and the 2000” and quickly let Ms. Badu know she tried it. Relenting, Erykah agreed to do things India’s way, giving us a lovely performance of “Breathe.” With Ms. Badu providing backing vocals, India gave us a soul-stirring performance of her song about finding hope in struggle. Inspired by Eric Garner’s last words, the song is very poignant in light of the  Black Lives Matter Movement and the recent presidential election. It’s always great to see these two women perform separately, and together they're pure #BlackGirlMagic.