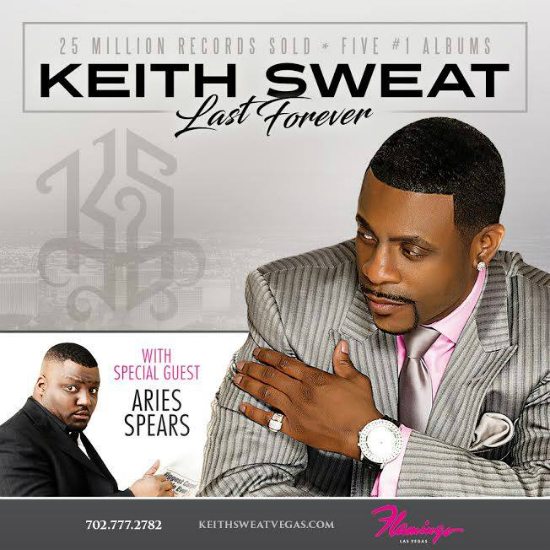 Keith Sweat joins fellow R&B artists like Mariah Carey and Boyz II Men who've taken their shows to Sin City and set up a Las Vegas residency. The R&B legend is taking over the Donny & Marie Showroom at Flamingo Las Vegas with his Keith Sweat: Last Forever show, which will run at the top of 2017 from January 17th through February 4th. The Vegas stint also features special guest comedian Aries Spears. The 15-show run marks the 30th anniversary of his debut album Make It Last Forever, so expect to hear hits like "I Want Her," "Right and Wrong Way" and "Don't Stop Your Love," alongside jams such as "Make You Sweat," "Twisted" and "Nobody" from later albums.

"This is what I like to call the second act of my career," said Keith. "This is the most exciting moment in my life.  I cannot wait to hit the Flamingo stage and take Las Vegas fans on the Keith Sweat magical musical journey! Fasten your seatbelts Vegas - it's going to be a thrilling ride," he said in a press release.

While Sweat serves up the romance, Spears will provide the laughs, and it's all sure to be a memorable experience. Keith made his return this year with his album Dress To Impress released in July and supported by the singles "Just The 2 Of Us"  and "Good Love." If you haven't added it to your collection yet, you can get Dress To Impress right now on Amazon, iTunes or Google Play. If you've decided to head to Vegas to catch Keith Sweat, tickets just went on sale today on his website.