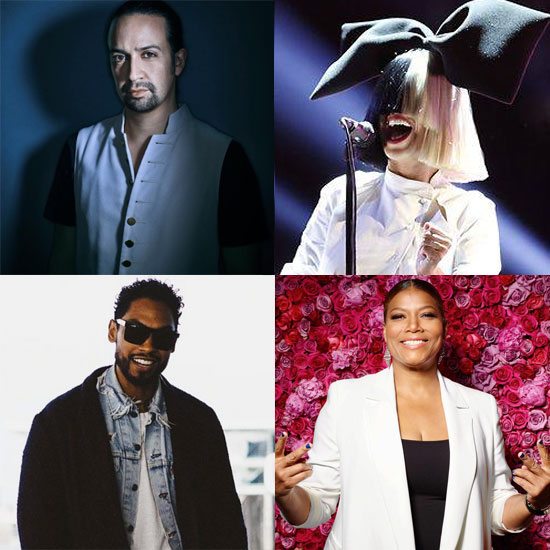 Since Lin-Manuel Miranda first announced that he had teamed up with The Roots' Questlove and Black Thought for The Hamilton Mixtape, we've been brimming with anticipation for what's to come. Then, once we saw the tracklist, which included guest appearances by everybody from Jill Scott to Ben Folds to Wiz Khalifa, we damned near lost our minds with excitement. After teasing all week that more music from the album would be premiering soon, he confirmed last night that not one, but two tracks, would be dropping at midnight. He made good on his word by releasing "Satisfied" and the all-to-timely "Immigrants" from the album, which is set to drop December 2nd.

The first single features the unlikely team of Sia, Miguel and Queen Latifah as they tackle "Satisfied" from the original soundtrack. Sia's big voice combined with the dramatic strings in the background maintain the theatrical feel of a Broadway production, while Miguel's natural sex appeal adds a certain steaminess not heard in the original. Queen Latifah blazes in and reminds us that before she was the actress and singer that we know today, she's first and foremost an emcee. To celebrate the song's release, Lin-Miranda took to Facebook where he released a video of actor Jonathan Groff, one of the song's original performers, hearing Sia's cover for the first time. It's hard to resist the urge to smile as Groff basically becomes the visual representation of the phrase "unable to can't." He all but loses it in what we can clearly interpret as approval.

The other song that Lin-Manual released was "Immigrants," featuring K’naan, Snow Tha Product, Riz MC and Residente, which is all too relevant with the current post-election blues we all are experiencing. Take a listen to both and don't forget to pre-order your copy of The Hamilton Mixtape to add to your collection.