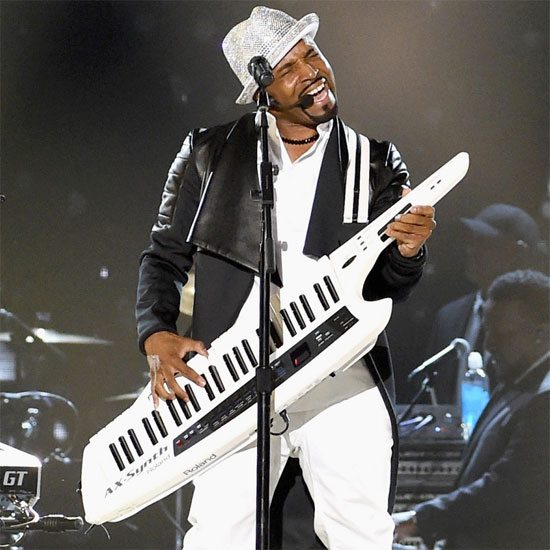 Singer/songwriter/producer/musician/living legend Teddy Riley is a man of many talents, widely recognized for creating the New Jack Swing genre of R&B, which continues to inspire and influence music today. It was only right that the frontman for groups Guy and Blackstreet, as well as the producer of hit songs in the ‘80s, ‘90s and the 2000s, would get his just do and be recognized for his talent as the recipient of the Soul Train Legend Award. However, while Riley was the man being honored, the musician also used his spotlight to honor the legacies of the men and women he’s worked with over the years.

Decked out in a white outfit, leather jacket, sparkling silver hat and a vintage white keytar (they still make those?), Riley gave us a quick medley of hits, including “Teddy's Jam” and Keith Sweat’s “I Want Her.” He then performed songs from some of his dearly departed friends, such as Heavy D’s “Now That We’ve Found Love" and  Johnny Kemp’s “Just Got Paid,” singing the lyrics using a vocoder, giving us a Daft Punk-esque version, though Riley’s been the man on the vocoder way before the French duo. The audience was rocking, especially his fellow Virginia representer, D.R.A.M. Next, the musical maestro gave us a taste of Hi-Five’s “Kissing Game,” honoring Tony Thompson, and causing Fat Joe to relax his thug a bit a do a two-step.

Teddy then stepped back and gave the stage up to a few guest performers. Doug E. Fresh, who must be drinking the same elixir of blood and unicorn tears as the ageless Pharrell Williams, blessed the stage by performing “The Show,” V. Bozeman standing in for SWV to sing “Right Here,” Bobby Brown strutting his stuff on “My Prerogative” (unfortunately without the “Right Ted?!” line) and Tito Jackson playing guitar over his brother Michael Jackson’s “Remember The Time.” Finally, we were treated to a surprise performance of “Rump Shaker” by Wreckx-n-Effect. Unfortunately, none of the girls from the original video made an appearance, but who would have guessed we’d be seeing this performance in 2016 -- and that it would be as lit as ever?

Finally, we got the performance we all expected but dared not ask for, a Guy reunion! Aaron Hall came on singing the classic “Let’s Chill” while Damion Hall was getting his two-step and stanky leg on. The trio then proceeded to move the crowd with more Guy classics, “Groove Me” and “I Like.”

When Riley accepted his Legend Award, he again played modest about his own talent, obviously overcome with emotion. First  giving honor to God, Riley then thanked his mother, father, grandfather and then his many, many, many children. Apparently, he was as prolific in the bedroom as he was on the charts. He also shared the moment in his life that made him want to be a star, when Gladys Knight picked him up while performing at the legendary Apollo in New York City. While Riley’s work is amazing, what is truly spectacular is the humbleness and modesty of the man behind the music, who has achieved so much in his life, but gives props to those who help him along the way. It's the mark of a true legend.