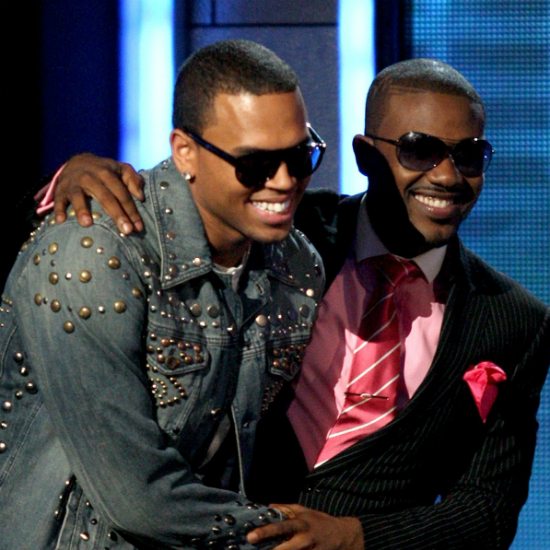 The phrase “All's fair in love and war” couldn’t be any truer when it comes to singers Ray J and Chris Brown. The twosome are known for their infamous exes, who they've made famous by mere association. They're also known for their extreme levels of petty with regard of said exes, writing deeply personal songs, posting madness on social media and engaging in outrageous behavior. Now the two have decided to let their petty powers combine on their new song, "Famous," flexing on their exes Kim Kardashian-West and Karrueche Tran.

Produced by Drumma Boy, “Famous” borrows its title from Kanye West’s song of the same name, the video for which featured likenesses of Ray J and Chris Brown, amongst a number of other celebrities, in bed together. While Kanye’s “Famous” video was an artsy affair that delivered some sort of message that many of us may or may not have gotten about living in the spotlight, this “Famous” is a totally different thing altogether. The boys come out swinging and talking big ish, with Chris Brown singing, “I’ll f**k around and make another one famous.” While Breezy doesn’t explicitly say anything about his exes, Ray J discusses specifics of his previous relationship with Kim, from her being the mastermind behind their infamous sex tape that put her on with lines like, “Look at the family, they walk around proud / All because she had my d**k in her mouth.” The “Be With You” singer then closes the song with the line, “I got me a bad ass wife and I’m happy now.”

Are you, Ray J? Are you really?

A sequel of sorts to “I Hit It First,” “Famous” feels more like sour grapes than fine wine. It’s a pop culture footnote that makes Ray J seem like he really hasn’t moved on, but is clinging to the past, warts and all, because he doesn’t have anything better to do. While the subject matter of the song is obviously near and dear to the two men involved, speaking from the bottom of their petty little hearts, we can’t help but ask the question “Why?”

What makes the song so interesting is the timing of its release. Kanye was recently hospitalized for mental distress, going through his own breakdown in front of the whole world. Is Ray J trying to profit off of West’s headlines? Or is it all serendipity?

Yeah, we know it’s the latter, but we’re trying to give Ray J the benefit of the doubt. The man is almost hitting Orlando Brown levels of silliness with his ongoing war with the Kardashian-West clan. He’s also such an easy target for jokes. Of course, he doesn’t help matters when he does stunts and shows like this. While fans may have been waiting for Brandy’s little brother to drop his Raydemption album, it sounds like making amends for the past and letting bygones be bygones is the last thing on his mind at the moment.