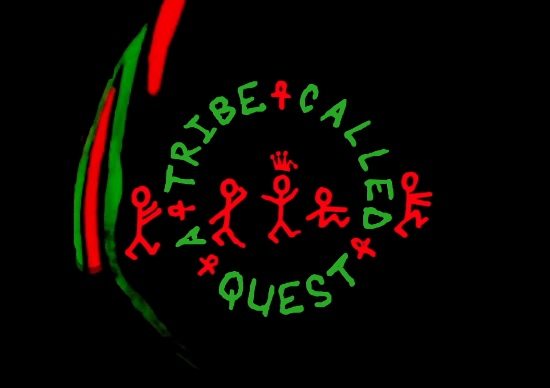 It has been a rough, rough week — hell, year — for us all. But, just when we were losing hope in humanity and faith in the world, A Tribe Called Quest comes through with the brilliance that is their last ever opus, We got it from Here...Thank You 4 Your service. The group's swan song, with its fun vibes and political leanings, couldn't have come at a better time. "We The People....," perhaps the set's most politically-charged track, is also its first single and has gotten a lyric video treatment fitting of Tribe.

The clip opens with the group's classic logo before panning out to show the symbolic red, black and green painted woman that has become synonymous with the group. From there, images in those very colors illustrate the lyrics of the song, which attacks the hateful rhetoric that's been spewed as of late, with the chorus ("All you black folks, you must go / All you Mexicans, you must go / And all you poor folks, you must go / Muslims and gays / Boy we hate your ways") eerily echoing the sentiments that have been and continue to be spewed against marginalized groups. Outside of the important message, the best thing the song has going for it is the reignited chemistry exemplified between Q-Tip and Phife Dawg on the track, with the late five-footer sounding stronger than ever as he spits like he was in his '90s prime.

Check out the lyric video for "We the People...." right here and hop below to stream the album in full via Spotify and don't forget to check them out as they rock the Saturday Night Live stage with Dave Chappelle on this Saturday night. As well, if you happen to be in New York City, you can buy a physical copy of the album as well as more ATCQ merchandise at their pop-up shop this weekend.


TAGS:  a tribe called quest, audio, dave chappelle, phife dawg", q-tip
Previous: Salaam Remi & BJ The Chicago Kid Tell Quite The Story On ‘Cheating On Us’ Next: Lin-Manuel Miranda, Sia, Miguel & Queen Latifah Leave Us ‘Satisfied’ With This Track From ‘The Hamilton Mixtape’