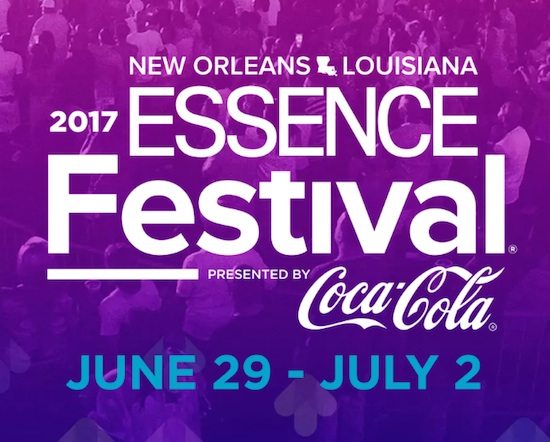 Add the 2017 ESSENCE Festival to your to-do list, bucket list, all your lists. The event held annually in New Orleans has been delivering some of the best live performances we've ever witnessed, and they're planning to bring us even more with their just-announced lineup for 2017's festival. In its 23rd year, the event will take place Thursday, June 29 through Sunday, July 2, 2017 at the Mercedes-Benz Superdome. Strategically mixing both veteran acts and newbies, next year's ESSENCE lineup features divas galore, including Diana Ross, Chaka Khan and Mary J. Blige, to divas-in-training, such as Solange, Jazmine Sullivan and Teyana Taylor. But that's far from all!

Make plans to get your pre-Fourth of July celebrations on at ESSENCE and enjoy live performances from SoulBounce faves Doug E. Fresh, Erykah Badu, John Legend, Lalah Hathaway, Tweet, Yuna and Lizzo. Known for featuring a little something for every musical taste, also scheduled to perform are Ro James, Michel'le, Moses Sumney, Shaggy, Sir the Baptist, June's Diary, The Jones Girls featuring Shirley Jones and New Orleans own Master P and Trombone Shorty & Orleans Avenue. Believe it or not, this is just the preliminary lineup, with more acts to be announced in the coming months. The nightly concerts will feature a who's who of entertainers who will showcase their talents across the festival's four Superlounges and on the Mainstage. And don't forget, there's more to the ESSENCE Festival than music, including their Money & Power showcase, Beauty & Style Expo, Lifestyle & Wellness Experience and more happening daily at the Ernest N. Morial Convention Center.

"This year's Festival lineup puts women at the forefront of an incredible weekend of entertainment featuring more than 40 of the world's most gifted artists and performers," said ESSENCE President Michelle Ebanks in a press release. "It is an honor to welcome the inimitable Diana Ross to the Festival for the first time. Plus, Festival veteran Mary J. Blige is back to share Strength of a Woman with her most passionate fans."

Oh yes! We're here for it, and plan to be back in New Orleans to experience it all. If you're ready to join us in NOLA for an incredible ESSENCE Festival weekend, ticket packages go on sale Friday, December 16th at 11 a.m. ET/10 a.m. CT with prices starting at $126. Visit the ESSENCE Festival's website for more information.