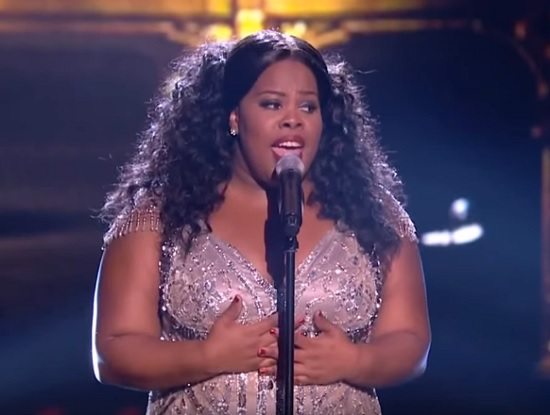 We've said it many times before and we'll say it again, Amber Riley deserves to be a STAR (yes, all-caps). The Glee alum constantly and consistently flexed her chops on the now-defunct FOX series but always seemed to find herself playing second fiddle. Then she popped back into our consciousness last year with her amazing turn as Addaperle in last year's live rendition of The Wiz that threatened to steal the whole damn show. Since then, Ms. Riley has been wowing audiences in London's West End during previews of the seminal musical Dreamgirls, in which she plays the star-making role of Effie White.

Just in case you wondered how she was fairing in the demanding role, she took some time to appear at this year's Royal Variety Performance. The charity event, often attended by British royals and a who's who of British celebrities, got a taste of Amber's raw talent as the gifted singer shared her rendition of make-or-break Dreamgirls showstopper "And I Am Telling You I'm Not Going" (which was made famous by Jennifer Holliday during the show's original run and then re-popularized by Jennifer Hudson in the play's film adaptation). To say that she did a great job would be the biggest understatement of 2016. Taking the stage in a shimmery gown, her hair in big curls, she proceeded to thrill the audience for nearly four minutes. Her vocal delivered the rollercoaster highs and lows of the song while adding a bit of nuance to make it entirely her own. And just when you thought she'd given all she possibly could have to the song, she held the last note out almost effortlessly, letting in ring loudly inside the Hammersmith Apollo theater as the audience erupted in applause.

You can check out Amber shining bright like a diamond during her heart-stopping performance below. Those of you in London town can get your tickets to see Amber doing the damn thing in Dreamgirls here.