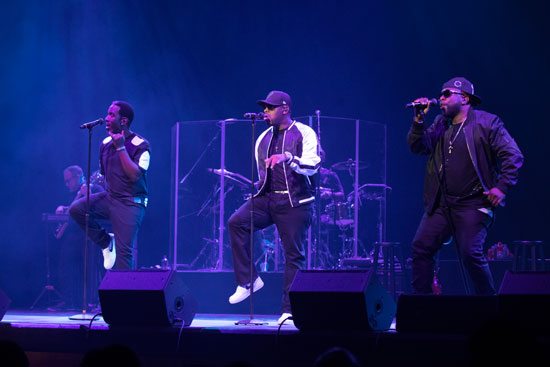 The talk of the DMV for the past week has been the December 8th grand opening of MGM Resorts International's latest property, MGM National Harbor, in Prince Georges County, Maryland. The resort has brought a new level of luxury to the area featuring the county's first casino, premier amenities and unrivaled experiences. Many of those experiences will no doubt happen in The Theater at MGM National Harbor, which opened its doors last night with a concert by R&B legends Boyz II Men.

Celebrating their 25th year in the business since the 1991 release of their debut album Cooleyhighharmony, Shawn Stockman, Nathan Morris and Wanya Morris took a break from their Las Vegas residency at the Mirage Hotel and Casino to bring their show to the DMV for this occasion. The energy inside the sold out, 3000-seat venue was electric as Boyz II Men fans packed the house and patiently waited for their favorites to take the stage.

Shortly after 8 p.m., Boyz II Men strode onstage casually dressed in black and white outfits and began their show with "On Bended Knee." The sweet song that has served as the soundtrack to many a marriage proposal back in the day set the tone early that the guys were going to treat everyone to their hit songs throughout the night, which they happily did. More hits followed, including "Please Don't Go" and "Uhh Ahh." The fellas switched gears from the sexy songs in their catalog to mining the catalogs of others to sing a number of covers. Their rendition of the unofficial Black National Anthem -- Maze featuring Frankie Beverly's "Before I Let Go" -- had everyone outta their seat and singing along, while Wanya's solo version of The Weeknd's "Earned It" was an unexpected surprise. Shawn and Nathan exhibited their musicality by playing the guitar and bass respectively as Wanya entertained with his singing, body rolling and twerking.

After a lengthy detour through remakes, Boyz II Men finally returned to their original material and got everyone in a festive mood with their classic holiday slow jam, "Let It Snow." They brought more of their classics to life, including  "Water Runs Dry," "I'll Make Love To You," "Mama" and "End of the Road," much to the audience's delight. It was soon the end of the concert, and Boyz II Men wrapped things up on a high note with their debut single "Motownphilly." Fans joined in to sing and dance to end the night on a celebratory vibe.

The inaugural concert at The Theater at MGM National Harbor was quite an enjoyable night thanks to Boyz II Men who christened the stage with lots of soul. Upcoming acts in the coming weeks and months include Lionel Richie, Bruno Mars and Earth Wind & Fire. For tickets to these and other shows, visit The Theater at MGM National Harbor website or purchase them from the box office. 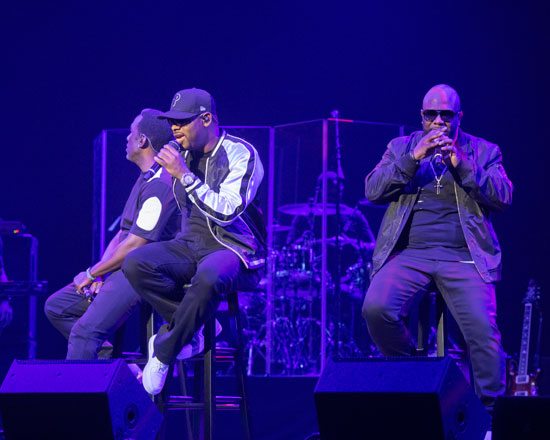