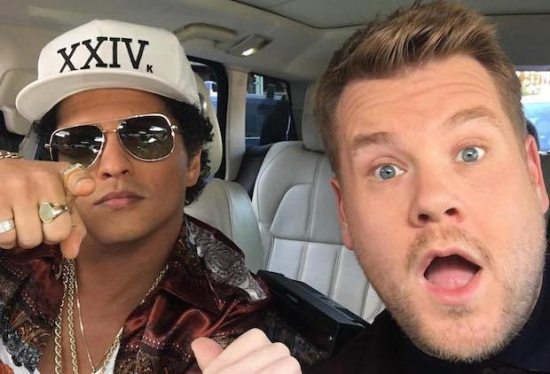 Bruno Mars has been burning up the charts with 24K Magic and tickets for his world tour are selling like hotcakes. So what else is there for Bruno to do to cap the year? Oh yeah, appear on The Late Late Show's ever-popular segment "Carpool Karaoke." Bruno was the latest act to hop in the passenger seat, which has featured the likes of Stevie Wonder, Jennifer Lopez and First Lady Michelle Obama riding shotgun with host James Corden.

For his segment, Bruno and Corden took a trip through the singer/songwriter's cavalcade of hits, include recent stunner "24K Magic," "Uptown Funk," "Grenade" and others (including a hilarious conversation about 24K Magic slow jam "Versace On the Floor"). But it wasn't all about the music, as James and Bruno talked about everything from his humble beginnings as an Elvis Presley impersonator in his father's '50s review to him paying his rent by playing cards upon first moving to L.A. By the end of it all, the diminutive vocal powerhouse even has James adapting his swag as the two don similar silk Versace shirts, gold chains and matching white XXIV K caps as they give Bruno's song "Perm" a nice little workout.

If you need a bit of fun to get you through your day, get yourself a laugh or a dozen by checking out Bruno's edition of "Carpool Karaoke" below.


TAGS:  bruno mars", elvis presley, James Corden, jennifer lopez, michelle obama, stevie wonder, The Late Late Show With James Corden
Previous: The Eclectic Beings Get Us Over ‘Hump Day’ Next: FKA twigs Is All About The Dance In Her Short Film ‘Soundtrack 7’