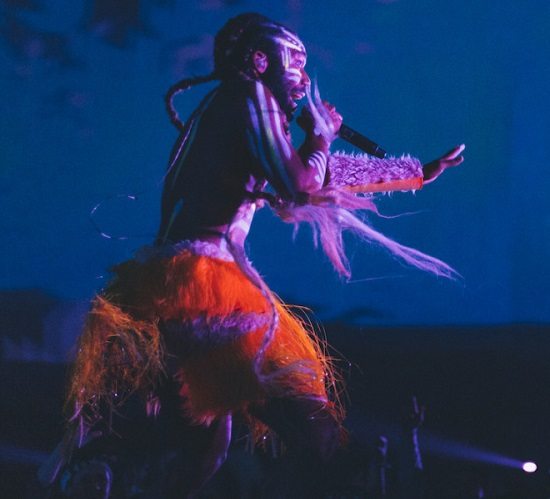 We're still flabbergasted by the unexpectedly funky joint that is Childish Gambino's Awaken, My Love! and have it on constant repeat around here at SBHQ. We've also been dreaming up how Gambino will be bringing these cuts to life both visually and on the stage. Perhaps we're getting our first hint of just that with a recently uploaded 360-degree YouTube video experience of the set's lead track "Me And Your Mama."

The clip, filmed during his PHAROS concert in Joshua Tree, California, this past September, is a recorded performance of the song that was first uploaded to his PHAROS Earth app — and it truly exemplifies the vibes felt when listening to the song. Gambino creeps onto the stage rocking Day-Glo tribal paint, a neon-colored grass skirt and long, swaying cornrows. From there, he launches into the song, dancing and moving erratically across the stage. While it's tempting to just watch him, though, there's so much more to see. Moving around in the 360-degree environment gives shows us the animated sky and artwork playing on the dome above the stage, the energy of the crowd and the band (who are decked out to match Gambino's slightly outrageous aesthetic).

Being that a "virtual reality vinyl" release of Awaken, My Love! is set for next year, we can't but wonder if many more videos like this are coming our way soon. While we ponder that, strap on your VR headset (or, you know, just use your mouse to scroll around) and check out the performance below.


TAGS:  childish gambino, Donald Glover"
Previous: Charlie Wilson Is ‘In It To Win It’ With New Album And 2017 Tour With Fantasia & Johnny Gill Next: Rachel Foxx Wants To Give It ‘To You’