Childish Gambino Shows Off His ‘Redbone’ On ‘The Tonight Show’ 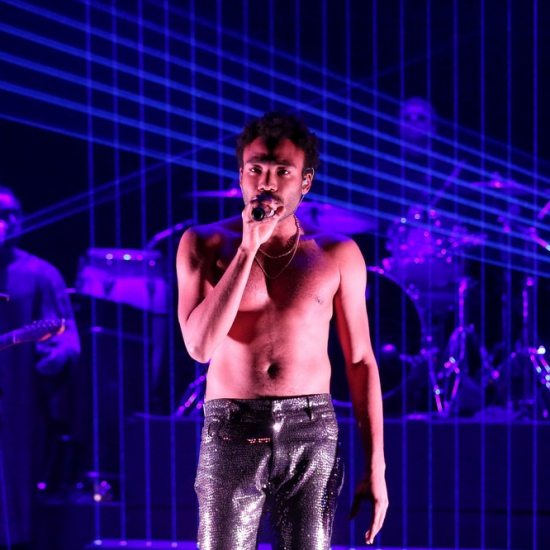 Donald Glover/Childish Gambino is having the best year ever. On top of landing a Critic's Choice Award and Golden Globes and NAACP Image Awards nominations for his critically acclaimed FX series Atlanta, the multi-hyphenate star also managed to move 72,000 copies of his set Awaken, My Love! in its first week, netting him a Top 5 debut on the charts and the No. 1 R&B album in the country. Not too shabby for an album that was an experimental shot in the dark. To celebrate, Gambino took his talents to The Tonight Show Starring Jimmy Fallon to deliver an electrifying performance of Awaken slow burner "Redbone" that's sure to get folks talking.

For one, he decided to take the stage sans shirt and in sparkly vinyl pants reminiscent of a disco ball. Secondly, he absolutely nailed the performance. Backed by a full band and six backing singers, he took us back in time with a soul-soaked rendition of the song, replicating the falsetto on the track near perfectly as he smoldered at center stage. The song, while vibrant throughout, truly came alive during the coda, as Gambino let loose with a squall as the red lights and blue lasers of the backdrop went haywire, reminding us of a time when funk and rock stars ruled the stage.

In case you weren't able to stay woke long enough to catch it (or you just want to relive it), catch Gambino's Tonight Show performance below. Awaken, My Love! is in stores now.