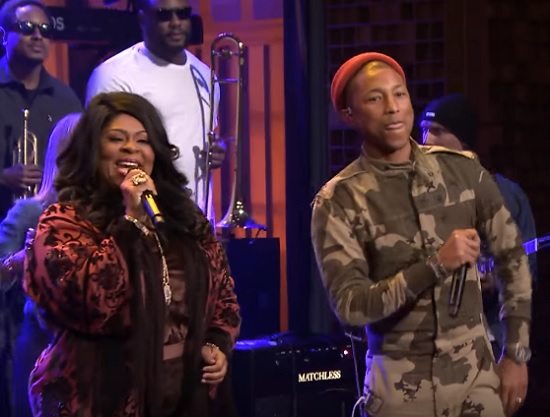 While Hidden Figures has a couple more weeks before it makes its official bow in theaters, it's Pharrell Williams-crafted soundtrack is officially in stores today. We've been chronicling the project since we received wind of it, including the gospel foot-stomper "I See A Victory." The Kim Burrell-assisted single finds Kim's gospel style melding quite nicely with Skateboard P's futuristic funk and has been motivating us to keep pushing ever since we first heard it via an exuberant live performance at the Toronto International Film Festival.

On last night's edition of The Tonight Show Starring Jimmy Fallon, the pair reprised that high-spirited number for the television audience, taking the entire nation to church in the process. Kim led the song while rocking a fringed, crystal-embellished robe and backed by a full band and small choir. And of course Pharrell was at her side to support, his camouflage jumpsuit an interesting but obvious choice for hip-hop's resident spaceman. However, what they wore didn't really matter, as they got the crowd up on their feet shouting and clapping along with the sanctified ditty. Even host Jimmy Fallon had to shout his praises once the song was over, embracing Kim with a big, grateful hug in the process.

Peep Kim and Pharrell's Tonight Show gospel takeover below and be sure to pick up the Hidden Figures soundtrack from your retailer of choice.