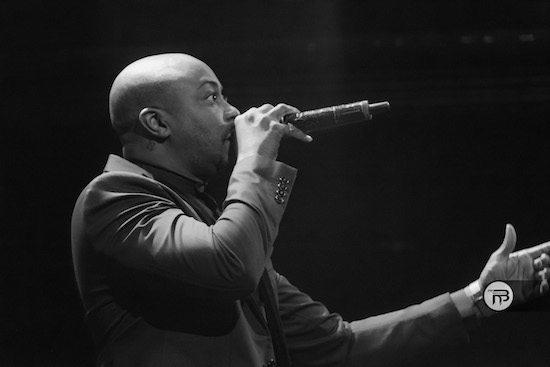 Something that DMV music lovers have come to look forward to every Christmas season is the Raheem DeVaughn & Friends Annual Holiday Charity Concert. DeVaughn, in association with his non-profit organization The LoveLife Foundation and the AIDS Healthcare Foundation, holds this benefit concert every December at Washington, D.C.'s historic Howard Theatre. Starting from humble beginnings in 2013, the annual event was at capacity this year with folks who came out to enjoy a night of R&B, soul, hip-hop and go-go performed by local and national acts on Tuesday, December 20th.

Raheem managed to snag a who's who of artists to lend their talents to the cause. Actor/singer Chaz Shepherd, who appears with DeVaughn in Love Jones: The Musical, was show opener. We caught up with Shepherd backstage to chat about his experience working on Love Jones: The Musical, which he described as "a lot of fun." Apparently the performers weren't the only ones enjoying themselves. "Sometimes the audience becomes a part of the show," Chaz shared, and that was also the case at this concert with everyone in attendance turned up to see the all-star lineup.

One of those all-stars was none other than Empire star V. Bozeman, who switched her signature look up for the evening with a sleek black wig.  After newcomer Chantil Dukart performed, V. was next to grace the stage with her dramatic vocals and immense stage presence. She was more than happy to support this endeavor. "I feel so good to be here in D.C. and to support Raheem DeVaughn and his LoveLife Foundation and AHF," Bozeman told us backstage. "He's a great philanthropist, and I wish more artists would follow his lead when it came to using our platforms."

Tweet, who made her official comeback earlier this year after numerous starts and stalls, was next to perform. About being back on the music scene, the Southern Hummingbird said, "Oh my God, it's been a whirlwind of emotions. I've been gone for some 10 odd years, putting out stuff here and there. but I'm thinking out of sight, out of mind and people aren't gonna notice and they're just gonna brush it off. But Charlene has been the greatest set up record for 2017." It sounds like Tweet has some more surprises up her sleeve, but it was no surprise that she sounded incredible as ever onstage at the Howard Theatre as she set the stage for the evening's special guest, Ro James.

Raheem DeVaughn surprised everyone with the new GRAMMY-nominee James, fresh from touring with Mary J. Blige and Maxwell. Before he went home for the holidays, Ro made a detour to D.C. to show his support. "I just did it for love for my brother Raheem," Ro admitted. "I love D.C., and I'm coming back [in 2017]. It's the energy and people appreciate real music." The energetic, mostly standing crowd definitely showed their appreciation for Ro James' artistry as he sang his hit song "Permission."

Kelly Price was next onstage and although she only sang one song, her cover of "As We Lay," she came with deep pockets and presented Raheem with a $2,500 check from her foundation to his. The audience greeted Price's donation with massive applause, and DJ Quicksilva kept the vibes high with a go-go set that segued into the next act. DMV staples Black Alley entertained with a rocked-out version of Prince's "When Doves Cry" and two original cuts.

Before it was her turn on the mic, Chrisette Michele spoke with us about why it was important for her to be there. "Raheem is a good friend, and I'm always just excited to support him in all of his endeavors. As of late, he's become obsessed with giving back and when he calls I'm there to answer." Chrisette answered the call indeed with her performance of "A Couple of Forevers" and "Unbreakable." Feeling in the holiday spirit, she even sang a quick breakdown of a Christmas song for a festive moment.

After all these artists performed, the night was nowhere near done when it was time for Raheem DeVaughn to take the stage. First, he was joined by Wes Felton to perform "My People" as The CrossRhodes before he switched gears to transform into his solo loverman role and break the ladies off with some "Black Ice Cream." More fan favorites from his catalog followed, including "Guess Who Loves You More," I Don't Care," "Temperature's Rising" and "Customer." Having already surprised the audience with Ro James earlier in the evening, Raheem had another trick in his bag when DMV rap star Wale trotted onstage to raucous applause. Wale shared some dance moves and a live rendition of his song "My PYT."

Rare Essence was last to take the stage, and they ended the night on a high with their popular go-go songs that had this hometown crowd lit.

Raheem DeVaughn and his many friends devoted their time and talents to a cause greater than them, and their hard work and dedication showed throughout the night. This cast of performers from near and far was impressive and has us excited to see who joins in on the festivities with a purpose next Christmas.