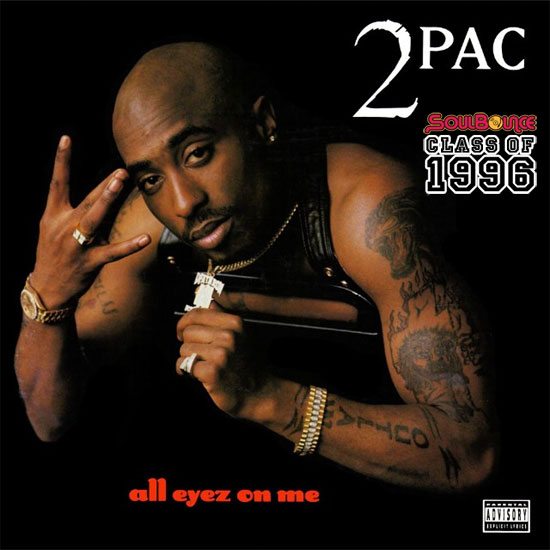 When 2Pac’s magnum opus and untimely swan song, All Eyez On Me, was released in February 1996, the rapper was at an interesting point in his life. And by interesting, we mean freaking crazy. The rap star had become infamous not only because of his music, but because of all of the drama associated with his outspoken personality. In November 1994, the rapper was shot five times leaving New York’s Quad Recording Studios. At the same time, he was facing sexual abuse charges that would ultimately send him to the Clinton Correctional Facility. Stuck in jail, Shakur struck a deal with Death Row Records CEO Suge Knight, who paid the $1.4 million bail for the rapper in exchange for a three album deal. ‘Pac went straight from prison to the studio, completing two of the three albums in that deal and creating what would become one of the most historical rap projects ever in just two weeks.

Produced largely by Daz Dillinger and Johnny J, All Eyez On Me was a departure from 2Pac’s usual modus operandi. While the star was usually somewhat conscious in his music, Eyez embraced the thug lifestyle of his newfound home at Death Row Records, ultimately a showing of excess and thuggery — not to mention anger, paranoia and arrogance. While Pac’s subject matter may have taken a dip in standards, the beats were hitting. The lush arrangements of the sample-heavy G-Funk sound provided a stronger soundbed for the outspoken poet to shine. “California Love,” featuring Dr. Dre, would hit No. 1 on the Billboard Hot 100 and become his biggest single ever. The b-side, “How Do U Want It,” featuring K-Ci & JoJo, would also light up the charts. Then there are album tracks that would also become favorites like "Wonda Why They Call U B***h," "No More Pain" and, of course, "Ambitionz Az a Ridah."  Then there is “Hit Em Up,” the "How Do U Want It" b-side and East Coast rap diss record coming straight for Puff Daddy, The Notorious B.I.G. and more which turned the heat of the coastal rap feud from a barn blaze into a forest fire. However, despite the hits, with any double-disc project, especially one recorded in just two weeks, you know there is going to be filler. There was also an abundance of unknown rappers on the project who failed to really become more than just another random voice on the album. And, quite frankly, the project is also long, coming in at 132 minutes — which is longer than most movies.

Eyez would go on to top the Billboard 200 and Top R&B Albums charts and achieve Diamond status for selling over 10 million copies, as well as receive numerous accolades even decades after its release. While All Eyez On Me the album is definitely a musical milestone, it is more infamous for its effect on hip-hop culture. The project bolstered the infamous East Coast/West Coast hip-hop feud that largely characterized rap music in the mid-to-late '90s and allegedly contributed to the unsolved murders of both 2Pac and The Notorious B.I.G. It also glamorized the thug mentality and lifestyle in a way that continues to influence rap music. All Eyez On Me was the culmination of a variety of events in 2Pac’s life that ultimately culminated in his death less than a year after the album was released. It was his definitive album. And yet, it really doesn’t capture who Tupac is or was as an artist. It is mostly a portrait of an artist in a certain moment of his life. One which would define who he was for eternity — for better or worse.

2Pac All Eyez On Me [Amazon][iTunes][Google Play]