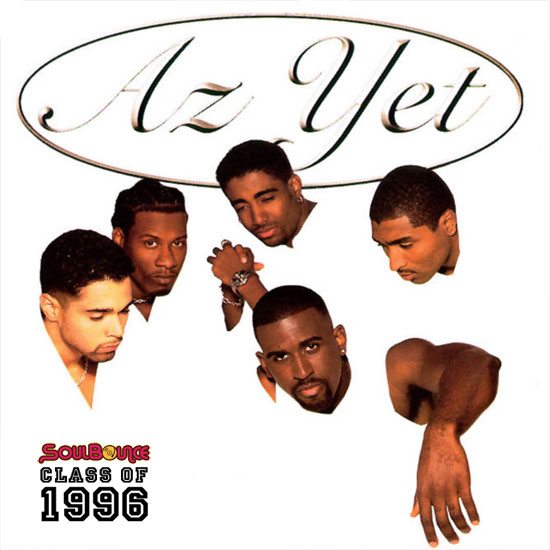 Philadelphia has long been a hotbed of R&B and soul talent. The City of Brotherly Love has nurtured homegrown artists who've gone on to worldwide success since the 1960's and that trend continued well into the '90s with acts that dominated the R&B charts, namely the group Boyz II Men who became international soul sensations. But there was another guy group out of Philly who had their eyes on the prize in 1996: Az Yet.

Founded in 1989 by Shawn Rivera and Dion Allen, the group grew and went through some personnel changes before settling into a groove with five members including original Boyz II Men member Marc Nelson, Kenny Terry, Jr. and Darryl Anthony. The group recorded a demo that got into the hitmaking hands of Kenneth "Babyface" Edmonds who would sign them to LaFace Records and executive produce their self-titled debut album. The quartet dropped Az Yet in April 1996 after their lead single "Last Night" dropped in February, smoldered on radio, got included on The Nutty Professor Soundtrack and raced up the charts, giving them a No. 1 R&B single out of the gate.  The sensual song about making sweet love became a staple on the quiet storm and put these fine fellas who not only looked good but sounded amazing, too, on everyone's radar. They stayed there thanks to their next single, a cover of Chicago's "Hard To Say I'm Sorry" that featured Peter Cetera himself and charted in the Top 10 of the Billboard Hot 100. Beyond the singles, the album was a Blockbuster and chill soundtrack, jam-packed with more love songs that showcased their vocal prowess and killer harmonies.

Although Az Yet seemed poised to give Boyz II Men a run for their title in the '90s, they subsequently only dropped a smattering of singles from soundtracks and didn't release another album — until this year, that is. Yes, a full 20 years after their debut, the group, who continued to go through lineup changes over the years and is now a quartet with Allen, Nelson, Terry and Claude Thomas, Jr., quietly released their sophomore project entitled She's Magic in September to little fanfare. Az Yet haven't been seen in years, but they can be found on Facebook and Twitter, and She's Magic can be purchased on iTunes.

Az Yet Az Yet [Amazon][iTunes][Google Play]