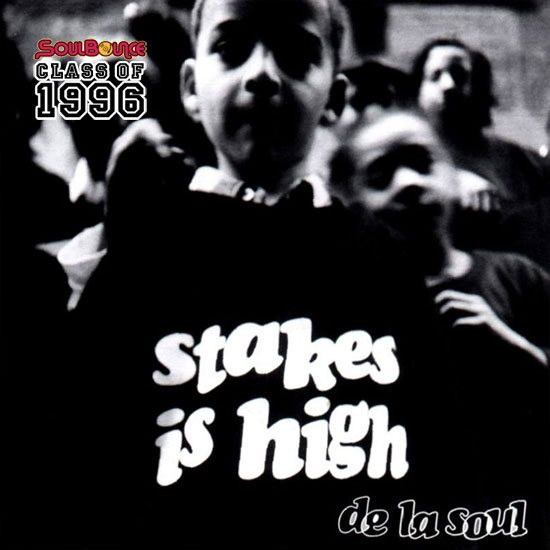 Known as the hip-hop hippies, rap trio De La Soul had already reached the peak of their careers by the time they released their fourth album Stakes Is High. Posdnuos, Dave and Maseo were instrumental in the evolution of the genre with their playful wordplay, funky mix of jazz and rap and their unique sampling. The group remained consistent in the quality of their work and at a time when gangsta rap was at the top of the charts, De La Soul provided a breezy escape from the glorified violence. With 3 Feet High And Rising, De La Soul Is Dead and Buhloohne Mindstate under their belts, Stakes Is High was a much needed break for hip-hop fans who needed a little more love and little less hate.

Stakes Is High was the first album not produced by long-time collaborator Prince Paul. De La Soul evolved with their sound, producing most of the album themselves, with the help of J. Dilla, DJ Ogee, Spearhead X and Skeff Anslem. The album criticized the state of hip-hop, angering the likes of 2Pac and Naughty By Nature, who were at the time riding the hardcore wave. The title track, which had the most commentary about the hip-hop industry, is also one of the earliest mainstream productions to be handled by J. Dilla. Although not a hit, it's included in the list of the group's most popular tracks. Stakes Is High also launched the career of Mos Def and featured collaborations with Common, Truth Enola, and the Jazzyfatnastees. Fellow Native Tongues group members A Tribe Called Quest, Mos, Common and NBA baller Jerry Stackhouse also appeared in the video for the single. "Itsoweezee (HOT)" served as the album's second single and gained the most popularity due to its creative video.

Although Stakes Is High was met with poor sales, it received critical acclaim for its production and lyricism. The group continued to impact hip-hop with their creativity, style and intelligent commentary, keeping old fans and gaining new ones with every release. Still making eclectic, conscious music, such as their widely praised 2016 release and the Anonymous Nobody..., De La Soul is lauded as one of the most iconic hip-hop groups of our time.