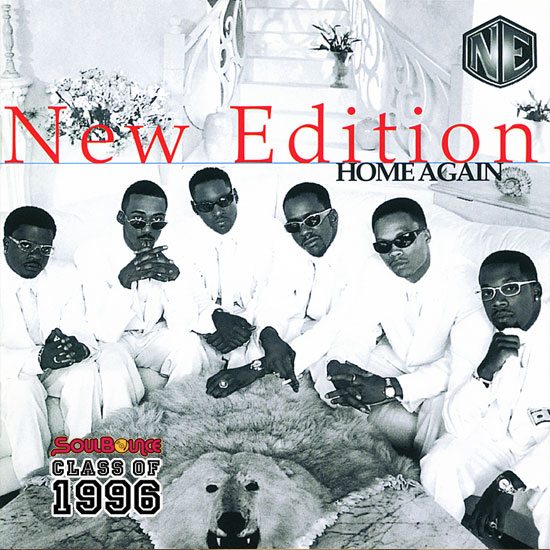 By the mid-eighties, many thought the lyrics of New Edition's "Is This The End" were manifesting (the departure of Bobby Brown and lukewarm reception of Under the Blue Moon), and in turn threatening the group's legacy. But the addition of Johnny Gill turned things around, allowing the quintet to redefine themselves with their monumental 1988 comeback album, Heart Break. Still, when the group began releasing career-defining separate projects in 1990 – solo albums for Gill and Ralph Tresvant, while Michael Bivins, Ricky Bell and Ronnie DeVoe debuted as Bell Biv DeVoe (aka BBD) – despite the overwhelming support of these individual albums, fans predicted the end had indeed come for New Edition. Our fears were put to rest, however, with the 1996 release of Home Again.

The aptly-titled project saw the Heart Break lineup embracing an edgier sound, but more importantly, welcoming original N.E. member Bobby Brown back into the fold. Building on the unstoppable momentum of lead single "Hit Me Off" (which topped the Hot R&B Singles chart for three weeks), Home Again premiered at No. 1 on the Billboard 200 as fans clamored for the sextet's first (and last) album. With production by Jimmy Jam and Terry Lewis, infectious slow jam "I'm Still In Love With You" mirrored the certified-gold success of "Hit Me Off," while the Missy Elliot-featuring remix of "You Don't Have to Worry" peaked at No. 7 on Billboard's R&B countdown. Subsequent singles failed to match the same levels of achievement. Not that it mattered, though, as Home Again went on to gain double platinum status and is arguably New Edition's greatest commercial success.

Sadly, six proved to be one too many as an infamous brawl during their reunion tour (sparked by DeVoe's attempt to get Brown off stage after he went way over time during a solo set) put an abrupt end to that particular lineup. In the studio, at least. The group went on to release One Love (sans Brown) in 2004 under the Sean "Puffy" Combs' Bad Boy label (a short-lived relationship). And though they haven't recorded a full album since, they've maintained an active touring schedule to this day. Recently, we've seen additional solo efforts from Johnny Gill and BBD, but what we're most excited about is watching their story unfold via cable biopic The New Edition Story set to air January 24-26, 2017 on BET.