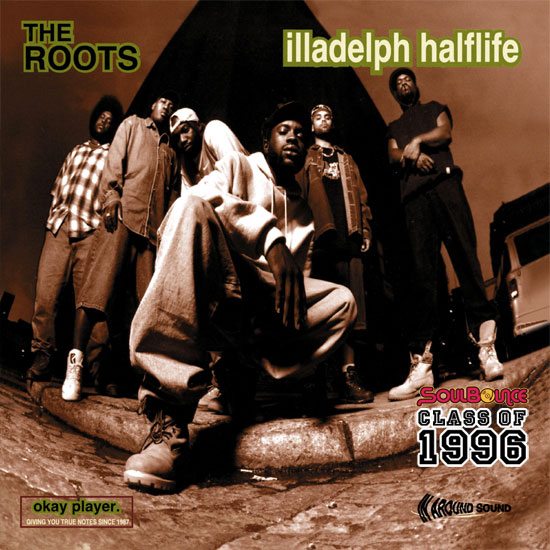 The Roots were more than just your average rap group. Formed by Tariq "Black Thought" Trotter and Ahmir "Questlove" Thompson in 1987, they were transforming into a cool collective with something to say, offering conscious cuts with memorable jazz and hip-hop instrumentals. After releasing their independent album Organix in 1993 and their major-label debut Do You Want More?!!!??! in 1995, the group still had more to prove and they did it with their 1996 offering Illadelph Halflife. Equipped with live instrumentation and politically conscious lyrics, the new album had a darker feel but shed a bright light on the state of the world and the music industry.

The album featured guest contributions by Amel Larrieux, Common, D'Angelo, Q-Tip and Raphael Saadiq and notable jazz musicians such as David Murray, Steve Coleman, Cassandra Wilson, and Graham Haynes. Released in a sea of R&B, neo-soul and gangsta rap, the group added thoughtful commentary about world affairs, rap and city life. Illadelph Halflife earned the group a spot in the Top 40 on the Billboard 200 chart. "What They Do" was one of their breakout singles, reinforced by their creative video, a hilarious montage of rap video clichés. The single also hit the Top 40 of Billboard's charts, reaching a peak of No. 34. The group also released "Clones" featuring Dice Raw and M.A.R.S., their first single to reach the top five on the rap charts.

The Roots went on to become one of the most notable rap groupsand their story isstill being written. With several albums, EPs and collaborations in their portfolio, over the years the band has skillfully moved across genres and attracted fans through several outlets including movies, commercials, podcasts and more. Also taking on the role of curators of cool, The Roots created one of the most popular annual music festivals, The Roots Picnic. Eight years young, the festival has provided some of the best live performances we've ever seen, and as it continues to grow, it just recently expanded from Philadelphia to New York City. The Roots also served as the house band on NBC's Late Night with Jimmy Fallon from 2009 to 2014 and upgraded to The Tonight Show Starring Jimmy Fallon since 2014. If we were to give The Roots a Class of 1996 superlative, they would hands down earn "Most Likely To Succeed."