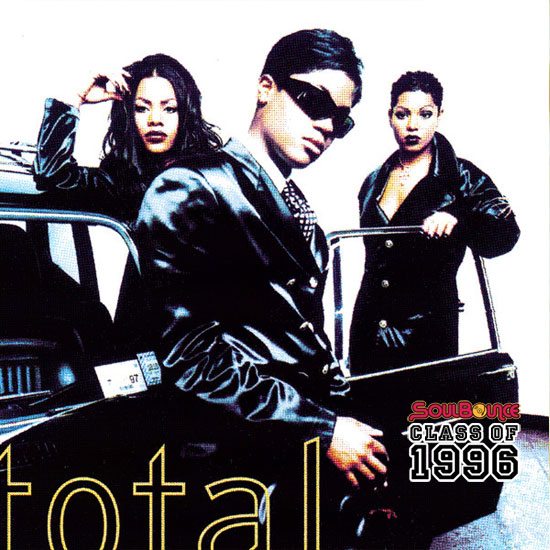 Though Total didn't drop their debut album until 1996, the story of the successful Bad Boy girl group actually began in spring of 1995 when the group's song "Can't You See" was released as a single from the New Jersey Drive soundtrack. The song, which featured label mate The Notorious B.I.G., rocketed to the top of the U.S. R&B singles chart and cracked the Top 20 of the Billboard Hot 100. Eight months later, they followed up that success with the release of hip-hop/R&B smash "No One Else," opting this time for a big dose of bad chick power with a feature from Da Brat, and scored another Top 20 smash on the Hot 100 and notched an impressive No. 4 spot on the R&B charts, pretty much paving the way for their self-titled album Total to dominate.

Total arrived the following January and continued with the fledgling group's hit parade. But honestly, they really had no choice but to be successful with a roster of hitmakers like Sean "Puffy" Combs, Raphael Saadiq, The Neptunes, Vincent Herbert and more handling production duties. Their efforts would result in another hit, the Saadiq-written-and-produced "Kissing You" (which would peak at No. 12 on the Hot 100) and the combo single of "Do You Think About Us" and "When Boy Meets Girl" (which would rise to the No. 61 slot on the U.S. charts). But beyond the singles, there was more heat to enjoy, including tracks like the funky "Do You Know?," sexy "Tell Me" and smooth slow jams "Spend Some Time" and "Don't Ever Change."

The year's following their debut would continue to be fruitful, with 1997 bringing their hit "What About Us?" from the Soul Food soundtrack and their sophomore effort Kima, Keisha and Pam, which landed them their biggest hit on Billboard's Hot 100 with "Trippin'." However, their second effort would be their last, with the group's members going their separate ways. However, this year saw Total reunite to perform during the Bad Boy Family Reunion Tour to sold out crowds. Maybe their onstage chemistry might be enough to spark a reunion in the studio? If so, we'll definitely be willing to lend an ear to see what the ladies of Bad Boy still have up their sleeves.