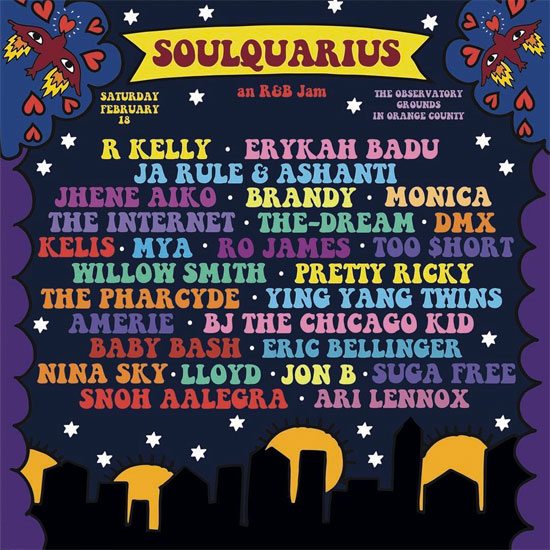 "Me and you, your mama and your cousin, too" isn't just a lyric from OutKast's classic song "Elevators (Me and You)," it's seemingly the strategy that went into planning the lineup for the upcoming Soulquarius concert. Dubbed "An R&B Jam," the concert/music festival happening in Southern California on February 18th features a random roster of soul, R&B and hip-hop acts present and past.

Headlining the day-long show that will take place at The Observatory grounds in Orange County will be R. Kelly and Erykah Badu, two R&B/soul stars who are still going strong, can draw a crowd and put on a great show (well, at least the latter can). Also on board are more stars who got their start in the '90s: archenemies Brandy and Monica (that could get real interesting), Kelis, Mya and Jon B. Amerie appears to have dropped the extra "i" from her name and gained a spot on the lineup, which includes more acts from the early aughts like The-Dream, Lloyd and the combo platter of Ja Rule & Ashanti. Meanwhile, Jhené Aiko, The Internet, Ro James, Willow Smith, BJ The Chicago Kid, Eric Bellinger, Snoh Aalegra and Ari Lennox will be on hand and repping the new wave of R&B.

We're actually here for all of the above, but then the lineup gets a little tricky. Pretty Ricky and Nina Sky? No shade, but really? Those are quite interesting additions indeed, but no more so than the hip-hop acts on the bill. Scheduled to appear are DMX, Too $hort, The Pharcyde, Ying Yang Twins,Baby Bash and Suga Free. The only thing missing is the kitchen sink, but maybe it was booked that day.

Regardless of the eclectic list of artists, Soulquarious: An R&B Jam still sounds like it's going to be the place to be on February 18, 2017 in SoCal to experience some dope performances and to see how this all shakes out. VIP and general admission tickets are on sale now via the Soulquarius website.