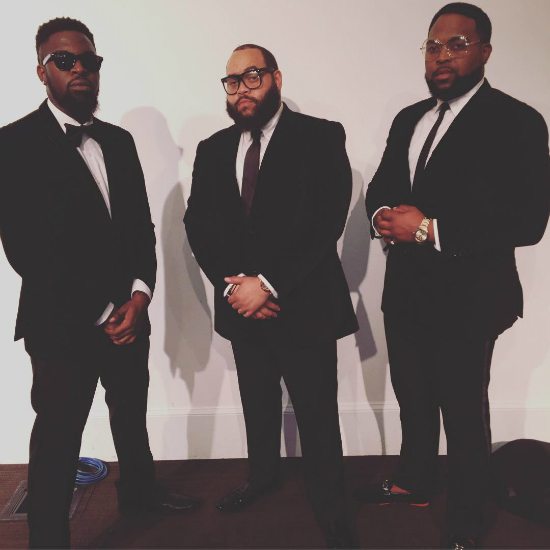 They may have gotten their start as Anthony Hamilton's background vocalists, but The Hamiltones are ready to take that leap to center stage and step into the spotlight. The trio, made up of singers Tony Lelo, J.Vito and 2E, have become soul sensations in their own right thanks to a string of viral videos over the past couple years that have showcased their vocal (and comedic) talents, increased their profile and gained them a legion of fans. Now The Hamiltones are hoping to pivot from viral stars into soul superstars with the release of new, original music.

This week The Hamiltones debuted their new SoundCloud page with not one, not two, but five new tracks that have us rejoicing at this bounty. Right on time for the holidays, the fellas kick things off with the song "Come On Christmas." Written, arranged and produced by The Hamiltones and frequent AHam collaborator Kelvin Wooten, "Come On Christmas" is a funky little yuletide groove that is the perfect addition to your soulful seasonal playlists. "Come On Christmas" is the kind of song that you play while cooking Christmas dinner with your family or to set off the Soul Train line at the office holiday party.

The jams don't end there, though. Included among these new songs are two to get the party started right and going all night with "You Got That Fire" and "Never Gonna Let You Go." "You Got That Fire" finds the fellas singing the praises of a woman who's got it going on with her "pretty face and thick like gravy" and has their undivided attention. The catchy lyrics and sound bed of bass, guitar and percussion create a soulful dance floor-filler reminiscent of '70s classics from The O'Jays and The Spinners. Meanwhile, "Never Gonna Let You Go," which The Hamiltones debuted this fall on the What I'm Feelin' Tour, is a bonafide steppers' groove. The bass-led track here again finds The 'Tones singing about a woman who has them utterly smitten and not going anywhere.

The Hamiltones slow things down on the remaining two songs, "Best Friend" and "I See You." Bringing the blues in R&B to the forefront on "Best Friend," the guys harmonize about the Godsend that their woman is, and on "I See You" they give her props for shining despite everything that life throws her way.

These songs are dripping with soul, some of the best singing to be heard and tight songwriting and production. If these tracks were together on a proper EP, it'd be one of the best we've heard all year. Tony Lelo, J.Vito and 2E all get time to shine, flex their vocals and prove that they have the range on these five songs. If this original music is a preview of what's to come in 2017 from The Hamiltones, then they can have all our money when their debut album drops.