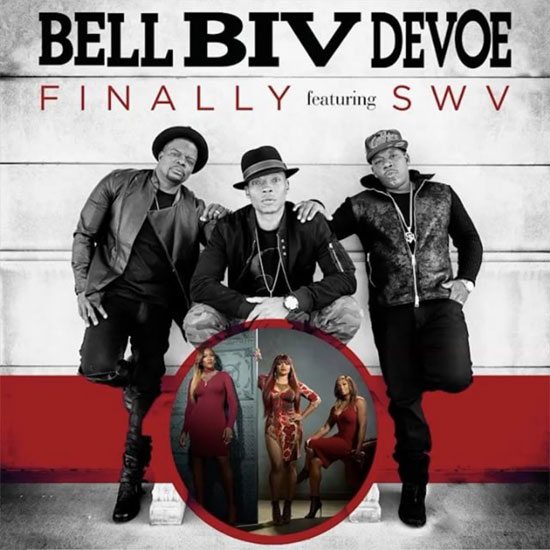 The members of Bell Biv DeVoe are on target to have their best January ever this month. Ricky Bell, Michael Bivins and Ronnie DeVoe are not only gearing up for the release of the highly anticipated BET miniseries, The New Edition Story, in a few weeks from January 24th-26th but their new album, Three Stripes, is set to drop that same week on January 27th. With their album release imminent, BBD have dropped a new single entitled "Finally" and they have some company along for the ride.

Following the first single "Run" and the Christmastime loosie "Happy Holidays," the fellas of Bell Biv DeVoe are joined by the ladies of SWV on "Finally" and the groups combine forces like two crews of R&B superheroes. The New Edition members and the Sisters With Voices bring their vocals and personalities to the table. The song begins with Mike Biv speaking to Tamara "Taj" Johnson and jokingly commenting how tall she is in heels while she sings a few notes in response. After the intro, Ricky takes over and sings about the joy of finally finding that right one. Cheryl "Coko" Gamble harmonizes with Ricky before continuing the lovefest on her verse. Not to be left out, Leanne "Lelee" Lyons joins in on background vocals and Big Ron speaks his peace on the bridge.

"Finally" is a sweet duet from these two sets of R&B legends. After hearing how good they all sound together, we're just mad that this collaboration didn't happen sooner.

Between "Run" and Finally," we are more than ready to get our hands on Three Stripes to hear what other heat Bell Biv DeVoe is bringing this winter. Pre-order Three Stripes now on Amazon, iTunes or Google Play.