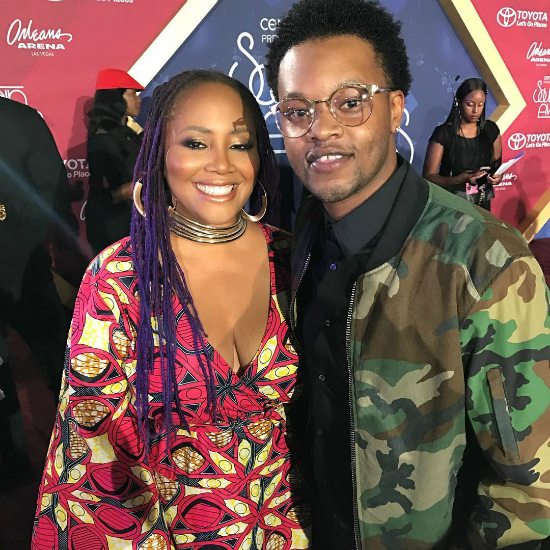 Anita Baker celebrated her 59th birthday last week, and Lalah Hathaway and BJ The Chicago Kid had a little present for her -- and us. The soulful Chicago natives decided to hook up in the studio for a remix of Hathaway's cover of Baker's 1983 hit single, "Angel." Lalah's "Angel" remake has gone on to be the biggest hit of her career and snagged her a nomination in the Best Traditional R&B Performance category at this year's GRAMMY Awards. The song taken from Lalah Hathaway LIVE (also GRAMMY nominated for Best R&B Album) sat atop the Urban Contemporary charts for 9 weeks and was perfect as-is, but the addition of BJ on the track is a welcome surprise.

Lalah's fellow GRAMMY nominee in the aforementioned categories holds his own and harmonizes beautifully with the honey-voiced songstress. BJ sounds quite impressive going note for note with Lalah and adding his own flourishes to this classic R&B track, turning it into an unexpected, excellent duet. This remix of the remake is a whole new song and aural experience in itself. "Angel" was already a gorgeous love song, but to hear two people sing these lyrics to each other takes it to another level of intimacy. If you're already making your Valentine's Day playlist, this remix most definitely deserves a spot on it.

Lalah and BJ were most recently spotted this past weekend at a GRAMMY nominee brunch in Los Angeles, and it looks like this "Angel (Remix)" might not be all to come from the pair. In a photo together with Terrace Martin, the caption on Instagram reads in part, "stay tuned." That we will.


TAGS:  anita baker, audio, bj the chicago kid, lalah hathaway
Previous: Fantasia Gets Her Happily Ever After In ‘When I Met You’ Next: Sevyn Streeter Has ‘Fallen’ For Ty Dolla $ign & Cam Wallace