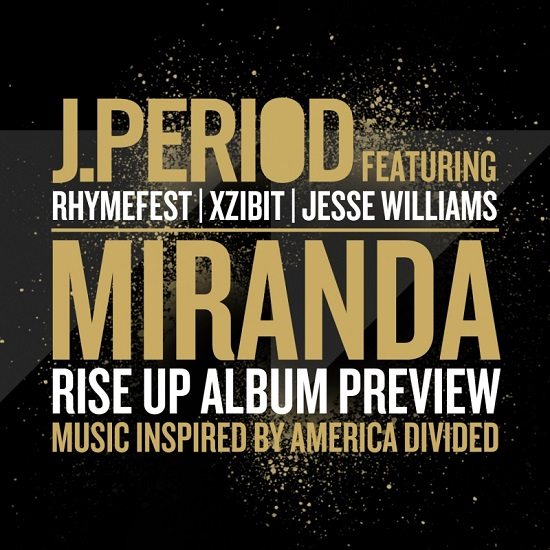 Now that we've officially entered into a four-year episode of The Twilight Zone, we're turning to the only solace that we have right now. Luckily, folks have been plenty busy creating music tailor-made to keep the fires of protest burning as we tuck in for a long, arduous fight. DJ, remixer and producer J.Period, prompted by the recent EPIX documentary America Divided, has crafted a mixtape titled RISE UP! Music Inspired by the EPIX Original Series, America Divided to act as a companion to the film. He also tapped one of the film's producers, actor and activist Jesse Williams, to be part of the project. In fact, Williams appears on the set's first single "Miranda," which also features veteran rhymers Rhymefest and Xzibit.

"Miranda," which takes its name from the rights that police officers are supposed to notify you about upon your arrest, kicks off with a spoken piece from Williams as swells of music and choral samples key up the track's drama. The Grey's Anatomy star ponders what it means to rise up, giving us food for thought as snippets of Martin Luther King Jr.'s "I  Have A Dream" speech are also heard. After the powerful word from Jesse, Rhymefest kicks knowledge over J.Period's epic production. Xzibit then joins in on the chorus, bringing it all home as reads us our rights: "You have the right to remain silent / So I suggest yo' ass stay silent / 'Cause it can and will be held against you / Can you afford somebody to defend you?"

RISE UP! has plenty more politically charged heat where that came from, with collaborators including Black Thought, Joss Stone, Maimouna Youssef, Aloe Blacc, DJ Jazzy Jeff, Tall Black Guy, Posdnuos, Pharoahe Monch and more. For more details about RISE UP!, including when and where you can get it, head to J.Period's website. Listen to "Miranda" right here.