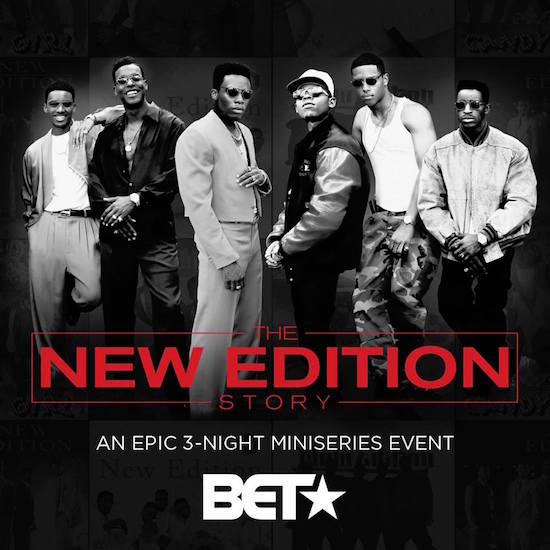 After what feels like years of build up, we are finally in the homestretch before the premiere of BET's The New Edition Story. The three-night miniseries event is set to debut January 24th, 25th and 26th and will focus on New Edition's meteoric rise to the top and all of the pitfalls and trials they encountered along the way.

As we patiently count down the days until the premiere, BET continues to stoke those flames of anticipation by releasing another trailer that provides a more detailed glimpse into what we can expect. While previous trailers released back in June and later in September provided our first look of Bryshere Y. Gray as Michael Bivins, Elijah Kelley as Ricky Bell, Luke James as Johnny Gill, Algee Smith as Ralph Tresvant, Keith Powers as Ronnie Devoe and Woody McClain as Bobby Brown, the latest trailer delves a bit deeper into the other major players involved in the guys' story.

In this trailer, we are provided more insight into the dynamics of their foray into the music industry as their mothers Flo DeVoe (portrayed by La La Anthony), Shirley Bivins (Yvette Nicole Brown), Patricia Tresvant (Monica Calhoun), Mae Bell (Lisa Nicole Carson) and Carole Brown (Sandi McCree) suddenly learn of the unfair business deal their sons had entered into. Money is tight and the tensions are rising as the fallout of that initial deal affects each member very differently. We also get to see the moment they first connected with Maurice Starr, portrayed by Faizon Love, in a move that would not only launch their careers but also nearly destroy them. This latest trailer also focuses heavily on the dissent that threatened to drive the group apart as we see members come to blows both onstage and off, revealing just how contentious things had grown between the childhood friends.

What makes this story so highly-anticipated is that many of the major players are actually involved in the film. New Edition members Bell, Bivins, DeVoe, Gill, Tresvant and Brown all served as consultants and co-producers on the film, which lends credibility to the story that is often lacking in television biopics. Adding to this, James "Jimmy Jam" Harris, Terry Lewis and Kenny "Babyface" Edmonds, who were behind some of the groups' most iconic hits (both together and as solo artists) are on board as music producers for the biopic.

Even with the premiere right around the corner, this trailer just makes us even more impatient to finally watch the series. With still nearly three weeks to go, the anticipation is killing us. Until then, we can at least keep hitting play on this trailer until the big day arrives.