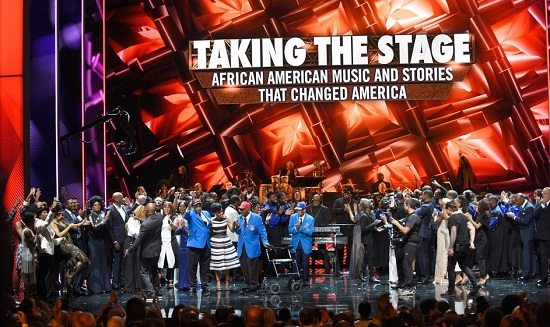 As we continue sadly crossing out the days until President Barack Obama leaves office, one of the legacies he will leave in his wake will be his commitment to the arts and highlighting the African American contribution to them. Thanks to a special airing on ABC stations across the country, we will get one final time to bask in the glow when "Taking the Stage: African American Music and Stories that Changed America" airs tonight (January 12th) at 9 p.m. EST/8 p.m. CST.

The two-hour special, taped back in September at the John F. Kennedy Center for the Performing Arts, honors the Smithsonian's new National Museum of African American History and Culture while paying homage to the cultural impact African Americans have had on the arts. A-list celebrities such as Oprah Winfrey, Stevie Wonder, Mary J. Blige and Tom Hanks were on hand for the grand event, which also included a standing ovation during a special tribute to the Tuskegee Airmen.

Other participants during the night's festivities included Angela Bassett, Dave Chappelle, Quincy Jones, Janelle Monáe and Will Smith. Meanwhile, Wonder, Blige, Herbie Hancock, Gladys Knight, Ne-Yo, Doug E. Fresh, Common and Christina Aguilera took to the stage to perform at the historic event. In a preview clip posted on Facebook, we get a glimpse of what to expect and, from the looks of it, it will be a soul-stirring and touching affair. There's sure to be some standout moments to witness, like Usher with a showstopping rendition of James Brown's "Get On Up," Fantasia's powerful performance of Aretha Franklin's classic "Dr. Feelgood (Love Is a Serious Business)" and John Legend's version of Marvin Gaye's "What's Going On?," just to name a few.

Be sure to tune into your local ABC station tonight for this celebration and follow along on social media using the hashtag #TakingTheStage. Be forewarned, though: you may need to keep a box of tissues handy as we mark the end of this historical era.