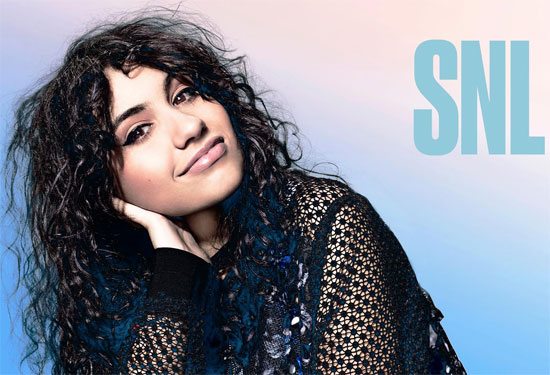 You know the old saying, “speak it as though it were so, and so it shall be.” Apparently Alessia Cara envisioned and spoke her debut Saturday Night Live performance this past weekend into existence years ago. During her appearance on The Tonight Show Starring Jimmy Fallon the night before, the Canadian songstress recounted her experience during a childhood trip to New York. She remembered visiting the studio long ago and standing on a monologue mark in amazement. “I was like, 'I'm going to be here one day,'" she says. "And the tour guide was like, 'Okay, keep going, move along.'" That tour guide is likely somewhere kicking himself, not knowing at that time he was in the presence of a rising star.

Cara showcased her undeniable talent with passionate performances of her self-love anthem "Scars to Your Beautiful" and her emotional tale of love lost “River of Tears.” During her performance of "Scars," the accompaniment of an orchestra only added to the drama of the motivational hit. A sharp contrast to the radio-version, her electrifying rendition seemed a bit more mature with the haunting of the string section providing the perfect complement. The 20-year-old singer/songwriter used her “River of Tears” performance as an opportunity to truly show off her vocal ability. With only a piano backing her up, Cara vocally conveys the pain and struggle of losing love. There was no complex choreography and no stage props, just the keys and her voice, both of which seemed to ache at the thought of moving on without the one she loves. It is here that those less familiar realize what Cara’s fans already knew: She’s not to be played with, lyrically or vocally.

The two tracks are from her debut album, Know It All, which was released in 2015. While the album reached the top 10 on U.S. charts and was certified Gold in mid-2016, more recently her song “How Far I’ll Go,” from the soundtrack of the Disney film Moana, was nominated for the Best Original Song at both the Oscars and the Golden Globes. It looks like her star will continue to rise, with no sign of coming down. Check out Alessia Cara’s SNL performances below and be inspired.