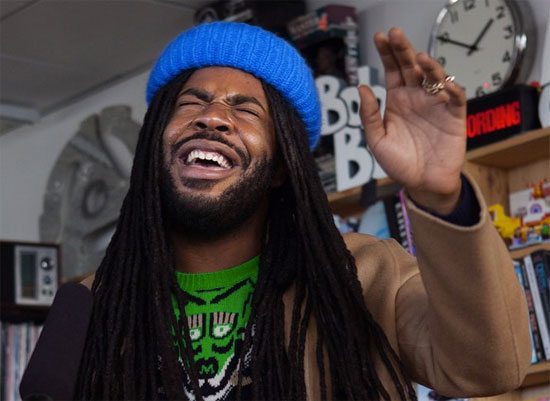 Big Baby D.R.A.M. popped up on our radar in 2015 with the amusing  “Cha Cha,” song. While we may have done a drunken two-step to the catchy tune, we didn’t quite know if D.R.A.M. would inspire us to pay him anymore attention pas that. However, the artist made 2016 his year, bringing the heat with a collection of fun tunes and collaborations with the likes of SZA and Erykah Badu. Since then, the Virginia native’s charm and playful nature has only grown on us. Hopefully, with his recent appearance at NPR Music’s Tiny Desk Concert series, the rest of the world will catch up.

The concert started with D.R.A.M. singing his latest hit “Cash Machine” with live accompaniment. While a more jazzy and sparse rendition of the originally bass-heavy piano track, D.R.A.M.’s charisma and undeniable flow made it entertaining even if he seemed a little thrown off by the song's pace. He followed that up with another standout track from the album, “Cute.” Here, guitarist Wesley Singerman shined, standing in for the synths of the track, while the rest of the band got in where they fit in and D.R.A.M. found his groove. Next, he gave it up for his home state with “Sweet VA Breeze,” a sultry ballad perfect for live accompaniment. If D.R.A.M. wasn’t showing out before, he decided to give us an inspirational message with the song, “Special” from Chance the Rapper’s mixtape, Coloring Book. Finally, D.R.A.M. closed out the performance with his GRAMMY-nominated hit “Broccoli,” giving us a hilarious "Chopsticks"-esque rendition before the beat dropped and he took it on home with the band.

You can catch the full performance below, and, if you haven’t given D.R.A.M.’s debut, Big Baby D.R.A.M., a listen we suggest you give it a quick spin on your streaming service of choice or pick up it up on iTunes. You can also catch D.R.A.M. on tour, which, after watching his Tiny Desk Concert performance, looks to be a good time. The artist definitely lived up to the acronym in his name -- “Does Real Ass Music” -- giving us unique musical stylings that we can’t help but enjoy.


TAGS:  Chance the Rapper, D.R.A.M., erykah badu, SZA, wesley singerman
Previous: Mayer Hawthorne Gets Off The Wall In ‘Time For Love’ Next: Bibi Bourelly Isn’t In The ‘MOOD’ For Any Nonsense