Take A Ride On ‘Seven Mile’ With Will Sessions & Amp Fiddler 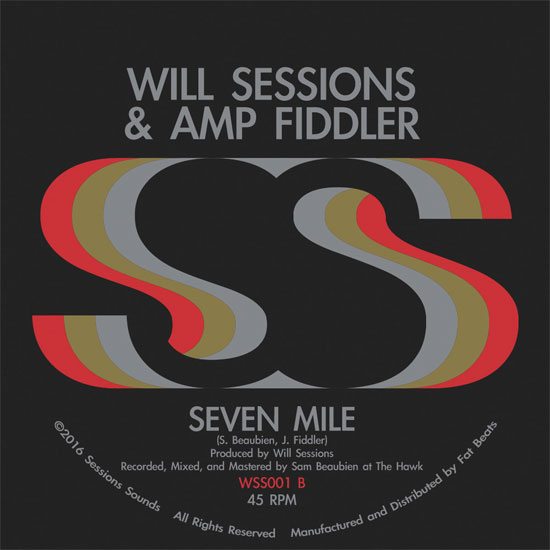 Will Sessions and Amp Fiddler want to take us places — to those vitalized spaces assumed by resilient spirits; celebrations of perseverance and heart. And although the destination is GPS friendly — you can find it on any map — you’ll require neither for this trip to "Seven Mile." The collaborative bluesy funk of these Detroit legends will get audiences safely and soulfully there.

Their two-track, 7” single, featuring the boogie wonderland of "Lost Without You" and now the smooth cruise control of "Seven Mile," is a special affair indeed. A prelude to their forthcoming full-length LP, these songs hint at the complete project’s soul-sonic majesty. Where "Lost Without You" took us strutting around the dance floor, "Seven Mile" has a more subdued and smooth request: let’s ride. Yes, this is top down, volume way up, hit the highway music, and Detroit is our fairway.

The song's groove line is unapologetic and listeners will hardly be prepared for the rhythm — it hits extra hard. We dare you to resist the body-rocking, stank-faced, head nodding this cut induces. It’s nearly an impossible feat as the lyrical journey through Detroit’s most historical parts unfolds. Imperial funk laced with Amp’s sexy wails instructs us to drop him off on Seven Mile Road. That’s cool. The artistry of Will Sessions and Amp Fiddler always deserves that kind of respect. And "Seven Mile" proves that like almost never before. But we hope he won’t mind a silent adieu, because nobody’s touching the volume. That would disturb the groove and there’s much more cruising to do.

It's no surprise that the cool 7" single combo of "Lost Without You" and "Seven Mile" is sold out on Fat Beats at the moment, but it should hopefully be restocked soon. Music this amazing needs to be owned. Until then, take "Seven Mile" for a spin right here.


TAGS:  amp fiddler, audio, Will Sessions
Previous: B.Slade Strips Down For ‘Leave The Lights On’ Next: Kehlani Comes Into Her Own On ‘SweetSexySavage’