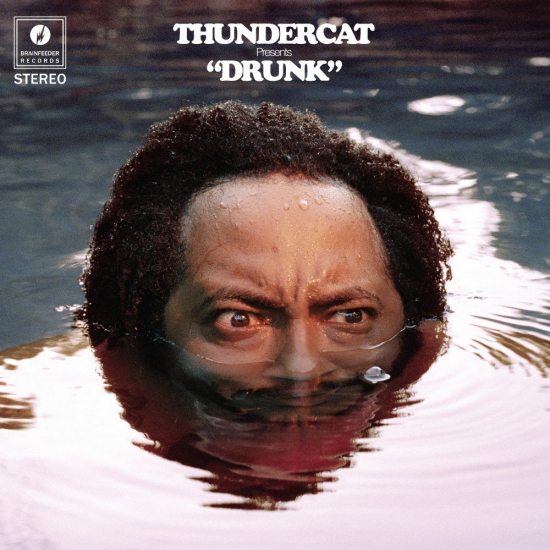 We're just at the end of February, but we've already been awash in new music releases every Friday from some our faves. This Friday is no exception as it sees the release of Thundercat's highly anticipated third full-length album, Drunk. Thundercat already had us open when he dropped the set's first releases, "Bus In These Streets," "Friend Zone" and the epic "Show You The Way," featuring legends Kenny Loggins and Michael McDonald, but the album in full offers a few expected delights and more than its share of surprises to keep us interested.

Drunk is full of the quirky, funky cool that we've come to love. He collaborates heavily with Flying Lotus on the set, resulting in some must hear jazzy funk in the process ("Captain Stupido," "Uh Uh," "Jethro," "Tokyo" and title track "Drunk" are prime examples of this). But it's the unexpected collaborations here that make all the difference. Near the end of the album, he joins forces with Pharrell Williams for "The Turn Down," a watery groove that evokes the feeling of being drunk off your a** once the party is over. For "Drink Dat," he invites Wiz Khalifa along for a smoked-out jam about a chance encounter with an alluring lady that has his attention. Elsewhere, frequent collaborator Kendrick Lamar shows up for an introspective turn on "Walk On By."

We had high expectations for this one, and Thundercat once again didn't disappoint. You won't be disappointed either when you stream Drunk in its entirety below and pick up your own copy at your digital music retailer of choice.