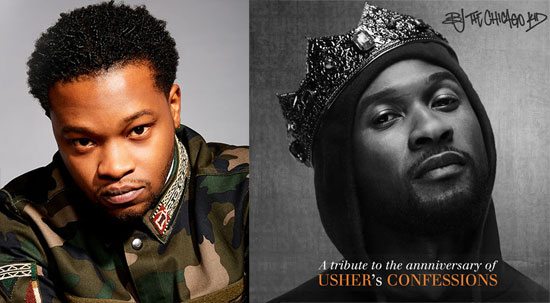 BJ The Chicago Kid is one of the few singers who understands how to cover everything from classic soul and R&B to a rock ballad with aplomb while making it his own. Over the past few years, BJTCK has paid homage to Aaliyah, Marvin Gaye and D'Angelo., and now he's giving props to another legendary singer, Usher, and his blockbuster album, Confessions. That project, released March 23, 2004, has sold more than 11 million copies, earned Usher three GRAMMYs and turned a teen star into a grown ass man. In addition to being a fan like the rest of us, BJ enjoys a special connection to the material, as the singer toured with Usher in 2004 as a backup singer.

BJ pays tribute to both the artist and his art with a three-track cover EP. Instead of going for the obvious hits on the album, BJ instead covers a few fan favorite album cuts. This is smart not only because it plays to BJ's strengths, but due to the fact that the album cuts were strong in their own right, helping to make the album such a beast. BJ's renditions are slower, more acoustic, brooding even. While not quite the change of pace that Chantay Savage's interpretation of Donna Summer's "I Will Survive" was, BJ's take on these tracks brings the material to life in a more nuanced way that pays proper homage while letting him get his shine on. In addition to flipping some of Usher's classic material, the Chicago Kid also shares a few of the singer's thoughts on music, incorporating soundbites from a few of the star's interviews.

The project starts with a mellow version of Usher's "Confessions Pt. 1," opening some audio from an Usher interview. Soon we hear BJ serenade his way into the proceedings, delivering the first verse in his raspy tenor. The interlude of "Simple Things" is a 39-second exercise in frustration. Just as BJ warms up and gets you ready for him to get you in your feels, the whole affair is over before it even starts. While we're all for leaving your audience wanting more, come on BJ! Thankfully, "Can You Handle It/Superstar," doesn't disappoint, as he does more than gives us a stripped-down version of the original, but adds some modern flourishes towards the end to keep things fresh and interesting.

While the tracks on this project aren't exactly complete songs, our boy is known to deliver plenty of covers on his tour stops. Hopefully these songs make their way into his live repertoire. Of course, when you consider that this project is available for free.99, you can't complain too much.


TAGS:  aaliyah, audio, bj the chicago kid, Chantay Savage, d'angelo, donna summer, marvin gaye, usher
Previous: Trey Songz Is Looking For Love But Isn’t Quite Ready For It On ‘Tremaine The Album’ Next: GoldLink Raises The Stakes With New Album ‘At What Cost’