BriaMarie & Musiq Soulchild Are Here To Make Everything ‘Okay’ 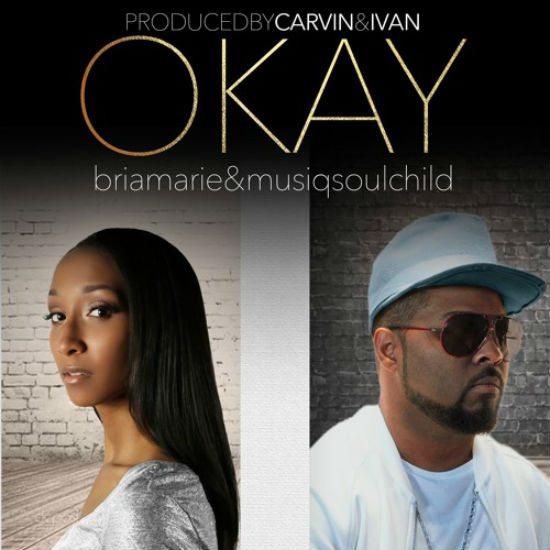 At the end of the day, all any of us really want is a love worth fighting for. It’s never easy, but through all the ups and downs, we all hope our better half sees the value in holding on. On her new single “Okay,” DMV's own BriaMarie partners with Philly's soulstar Musiq Soulchild to present both sides of love's sometimes tumultuous story. Bria offers the female perspective, while Musiq lays down the trials and tribulations of relationships in a way that only he can. The urgency and heartbreak are apparent throughout the track as the pair trade verses, but they hold on to hope as they unite on the final chorus to declare, “What we have is too great to give up / In my heart I believe we’ll be okay.”

Emerging singer BriaMarie showcases her fresh vocals throughout the track, displaying the signature sound that has earned her the moniker "The Fresh Princess." Her music has been featured on VH1, MTV, TV One and FOX, and when she isn't sharing the stage with the likes of Ledisi, Tweet and Raheem DeVaughn, she is giving back by participating in youth empowerment conferences, political committees and anti-bullying campaigns, including her own bullying awareness initiative called #LoveOverOctober. The humanitarian, entrepreneur and recording artist certainly has her hands full as she gears up for the release of her new album soon on Carvin Haggins’ Ethical Music Entertainment label.

We know Haggins as one-half of the Philadelphia producer/songwriter duo known as Carvin & Ivan with partner Ivan Barrias. The hitmakers collaborated with Musiq on his first five albums, including hit singles “Just Friends (Sunny), “Halfcrazy,” “B.U.D.D.Y.,” “TeachMe” and his duet with Mary J. Blige “IfULeave." Hot on the heels of his current single "Simple Things," Musiq reunites with his old friends to make magic once more on this song, which is the fruit of a partnership that, according to Haggins, couldn't have happened at a better time. “This collaboration seemed necessary for the music industry and the state of black music, and important for the love of R&B,” he says. He describes their latest collaborative effort as “the modern version of the hits we’ve created in the past. Taking elements of hip-hop and elements of soul and using it as a music bed for real-life stories.”

If you're in need of a bit of motivation to stick it out with your significant other or if you’ve just been missing R&B you can relate to, give the new single “Okay” from BriaMarie and Musiq Soulchild a spin and look out for more new music from both artists in the coming months.