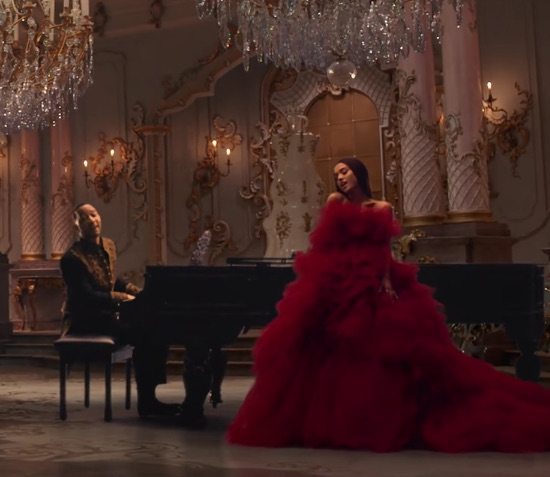 The live-action remake of Beauty and the Beast will soon hit theaters, but if the movie trailer wasn't enough and you can't wait to see the main characters come to life, then you're in luck. Look no further than the music video for John Legend and Ariana Grande's remake of the movie's theme song to witness Emma Watson as Beauty and Dan Stevens a Beast dancing a romantic waltz as the pop singers serenade them.

You would think that Beauty and Beast cutting a rug would be the center of attention here, but it's Ariana Grande who steals the show. She looks absolutely breathtaking in a full, flowy red gown with yards and yards of ruffles and a train. Gone is her signature high ponytail, replaced by sleek, long straight hair. Her darker locs complement her darker complexion, which is bronzed to perfection. Often stuck in a style rut, Grande looks good and grown here. When she's surrounded by interpretive dancers also dressed in red gowns who envelope her in oversized rose petals, it makes for a stunning visual. John Legend meanwhile is stuck at the grand piano and despite the gold trim and details on his jacket, his costume pales in comparison. Try as they might, Legend and Grande's "Beauty and the Beast" cover also pales in comparison to Peabo Bryson and Celine Dion's original composition, but the fantastical music video filled with special effects will distract from the remake's shortcomings.