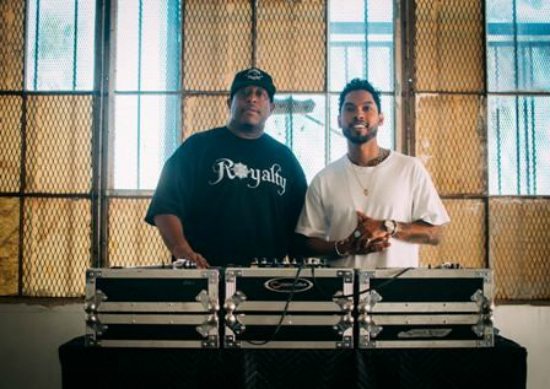 Perhaps one of the more surprising collaborations we've seen this year, DJ Premier and Miguel are back this week to drop off the visuals for their new single "2 LOVIN U." When the duo premiered the track a few weeks ago, we were caught off guard but happy to get the song, which is an updated version of "damned" from Miguel's Wildheart album. To make their collaboration even more real for fans, they realized a video was in order.

Like the single, the visuals are a clean and simple celebration of love, featuring various couples frozen in time embracing or kissing. Miguel dons a white tee and walks around a warehouse singing, while DJ Premier holds down the 1's and 2's, mixing and scratching throughout the track. Fiery light beams appear throughout the video as Miguel croons, "We set fire to these skies for our love and I'd do it all again." The displays of love are heartwarming, and the temperature rises a tad when Miguel walks between a line of the misfit couples, creating a waterfall effect of some serious lip locking.

While the video ends with a solo dolo Miguel, we're looking at the crooner as our new, modern-day cupid. If you believe in love and the power of unexpected unions, you can get DJ Premier and Miguel's single on iTunes now. "2 LOVIN U" is the first release from Premier’s new imprint TTT (To The Top), which allows him to release anything he pleases that falls out of his hip-hop wheelhouse. Press play to watch the visuals for "2 LOVIN U" and see if it warms your heart.


TAGS:  dj premier, miguel
Previous: Joe Is Ready To Give His All In ‘Lean Into It’ Next: Quincy Gets His Father Al B. Sure! To Join Him On ‘I Can Tell You (Nite And Day 2.0)’