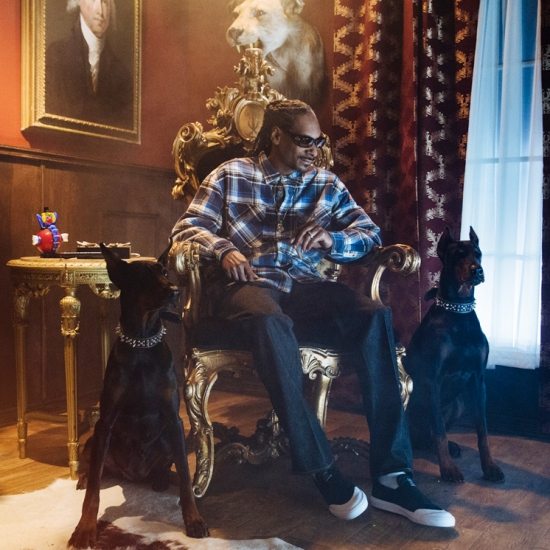 For their fourth album IV, Canadian quartet BADBADNOTGOOD delivered a well-crafted mosaic of trippy jazz instrumentals pulsating with hip-hop beats. From the acid jazz leanings of "Confessions Pt. II" to the '80s slow-jam vibe of "Chompy's Paradise" and the John Coltrane-influenced title track, we could spend hours listening to and dissecting the greatness of the entire collection. But one song that stands out as a favorite here at SBHQ is "Lavender" which features our boy Kaytranada. Simply put, these Neighbors to the North got in the studio and killed it. So when we heard rumors of a remix featuring Snoop Dogg, we were pretty curious to see how they could possibly improve upon perfection. The end result is the "Nightfall Remix," a seamless infusion of West Coast swagger along with raw lyrics and satirical visuals that provide biting commentary on the current political climate in America.

During a recent interview with Billboard, Snoop explained his lyrical motivation as "making a song that was not controversial but real -- real to the voice of the people who don’t have a voice." His candor is refreshing as he continues, "I feel like it’s a lot of people making cool records, having fun, partying, but nobody’s dealing with the real issue with this f**king clown as president, and the s**t that we dealing with out here, so I wanted to take time out to push pause on a party record and make one of these records for the time being."

As for the music video – which was conceptualized and directed by Jesse Wellens and James DeFina – Snoop adds, "It’s a lot of clown s**t going on that we could just sit and talk on the phone all day about, but it’s a few issues that we really wanted to lock into [for the video] like police, the president and just life in general." The clown theme is in full effect, complete with actor/director Michael Rapaport, confetti, cartoonish antics, Harley Quinn-ish henchwomen and a Clown-in-Chief. While there are some laughable scenes, the message is clear – and there's nothing funny about it.

Listen first, then peep the entertaining, but thought-provoking clip below and purchase your copy of "Lavender (Nightfall Remix)" by BADBADNOTGOOD via Bandcamp.


TAGS:  audio, BadBadNotGood, James DeFina, Jesse Wellens, Kaytranada, michael rapaport, snoop dogg
Previous: Quincy Gets His Father Al B. Sure! To Join Him On ‘I Can Tell You (Nite And Day 2.0)’ Next: La’Porsha Renae Breaks Up & Breaks It Down On ‘Somebody Does’