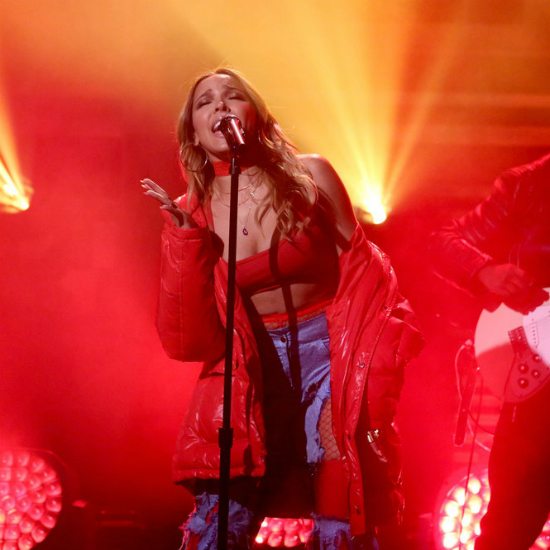 Earlier this month, Tinashe released her new single, “Flame.” A pop ballad about carrying a torch for a former lover, we hoped it was a sign of good things to come from the star who amazed us with her debut album. Her performance last night on The Tonight Show Starring Jimmy Fallon has given us even more hope, as we watched the singer give Jimmy Fallon and his audience a blazing live performance that showed off her grace, charisma and voice.

The set started with Tinashe sitting between two lights, but bathed in darkness. Soon the lights come on and we see Tinashe decked out in an oversized red bubble jacket and matching top, choker and flowing blonde locks. The stage was adorned with lit candles surrounding the singer with colored lights beaming and orange smoke billowing up during various points in the song. Thankfully, the set dressing wasn’t the best part of Tinashe’s performance. While the “Company” singer doesn’t give us any of her signature dance moves on the stage, she clearly knows how to perform and entertain. The singer stomped, scurried, shimmied and worked her magic on about three feet of the stage. In addition, she also put her pipes to the test, giving us a live performance that proved she not just a pretty face and Auto-Tune.

“Flame” is the official first single from Tinashe’s upcoming sophomore album, Joyride. While we’ve been waiting to go on that Joyride since 2015, it seems like the singer is finally ready to move full steam ahead with the project. If she continues to give engaging performances like this one, we might just hop on that train.