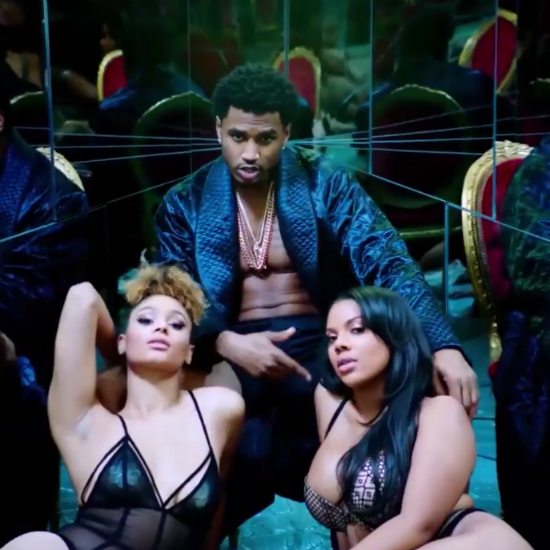 When Trey Songz began promoting his upcoming project, Tremaine The Album, the singer/songwriter promised that this album would show his relationship-oriented side. It would be a departure from the provocative playboy persona of his last album, Trigga. However, Trey is a playboy at heart. In fact, he’s spent much of the singles from his upcoming release lamenting that fact. We shouldn't be surprised that with the latest single, “Animal,” he fully embraces his natural tendencies.

“Animal” is a song about bringing out the wild side in your lover. The lascivious lyrics are filled with a number of sexual innuendos, such “ghetto kama sutra,” “National Geographic / Document it and record on a film,” “Boomerang, boomerang, / Baby, gone and throw it back” and our personal fave, "I be throwin' this banana all around / Put my face up in the monkey." R. Kelly would never. While the lyrics aren’t anything we’d read from Roxane Gay, that’s not the point. The song is an uptempo club record about letting loose and getting your freak on with your bad self. The production, a strip club-ready mix of guitar and atmospheric synths, is enough to carry Trey’s sing-song rap flow and make his fans shake what their momma gave ‘em.

The visuals for the track are just as savage. The video opens in the hall of mirrors where we left Trey and his ex-bae Kreesha Turner. However, Kreesha fades away and is soon replaced by the contestants of his reality show engaged in some very sexy behavior, grinding on each other, crawling on the floor on all fours, making it clap (no hands) and pretty much worshipping Trey. We also see an equally erotic strip poker game and a dance sequence in the mansion of the girls rocking Daisy Dukes and lingerie. There’s plenty of T and a whole bunch of A on display throughout the video, as every other scene features asses jigglin’ and wigglin'. However, while Trey is clearly having fun with all of the women in the video, there is one contestant who is clearly standing out, Ana Montana. Ms. Montana gets some extra special attention from Trey, and she’s more than happy to return the favor.

Speaking of women engaged in questionable, lascivious behavior, we're wondering what happened to his reality dating show this week. We tuned into watch the latest episode of Tremaine The Playboy, but all we got was a bunch of booties bouncy. Not that there's anything wrong with that. In reality, the show was really just a framing device for the release of his video of the week. However, we were slightly curious where the singer was going to go with the concept. Maybe he'll release something later, but at this point, does it even matter?

Despite the lack of a plot device, thematically, “Animal” serves as a great follow-up to last week’s single release, “She Lovin' It,” a song about playing hard to get. So far Tremaine The Album has been in need of something uptempo to turn up the festivities after the more contemplative slow vibe of the earlier singles. We'll stay on the look out for any new developments on the reality show front in anticipation of Trey's album dropping on March 24th. Until then, hit play and get into Trey's latest descent into debauchery.