Tuxedo Gives Us Pinball Nostalgia In ‘2nd Time Around’ 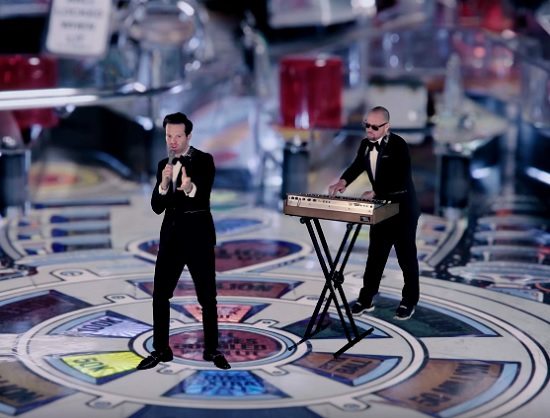 Tuxedo has always traded in the sounds of early '80s funk and boogie, so it's no wonder that they also look to that era for inspiration when it comes to their videos. That's definitely the case in the clip for their current single, "2nd Time Around." The fellas look to one of the era's favorite pastimes, pinball, to bring us a fun, flirty video that's sure to keep your attention.

The video, filmed in Las Vegas' Pinball Hall of Fame, features a gaggle of dancing ladies wearing the short-shorts and ringer tees popular during the era as they dance and pose among rows and rows of pinball machines. The limber ladies move, groove and shake what their mamas gave them throughout the clip. Where are group members Mayer Hawthorne and Jake Uno during all this, you ask? Miniature versions of the duo appear dressed to the nines inside one of the machines among the flashing lights, bells and whistles.

Filming the clip brought back some happy memories for Mayer. "I took my first big check from Stones Throw and bought a Theater of Magic pinball for my house," he said in a press release. "I still have it, although my new favorite is one called Tales of the Arabian Nights, which was designed by the same guy, John Popadiuk. When director Ross Harris suggested that we shoot the '2nd Time Around' video at the Pinball Hall of Fame in Vegas, it didn't take much convincing."

We're sure the nostalgic visuals will have many of you taking a walk down memory lane, too. Take a look at the clip for "2nd Time Around" and then head here for details about Tuxedo's current tour. Their sophomore album Tuxedo II is in stores now.