Big Boi Brings His ‘Mic Jack’ To ‘The Tonight Show’ 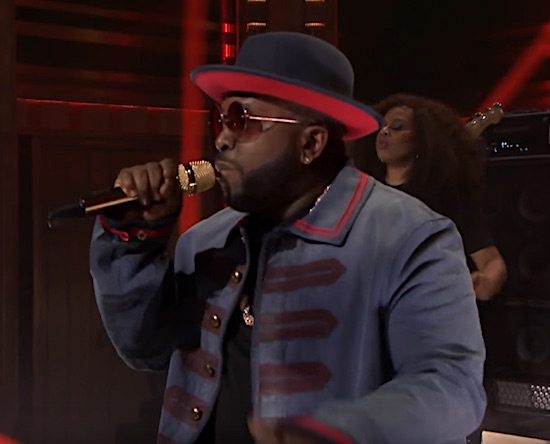 Last night The Tonight Show Starring Jimmy Fallon had a musical guest worth staying up late to see when Big Boi performed his new single "Mic Jack" for its television debut. His partner in crime on the track Adam Levine wasn't there to join him (and Jimmy Fallon didn't sub in for him), but he actually wasn't missed thanks to everyone who did accompany Big Boi live on stage.

On hand to party it up on the uptempo groove were frequent collaborator Sleepy Brown (who himself has some new hotness with his Organized Noize brethren brewing) who contributed vocals alongside Keisha Jackson, Scar and Debra Killings who doubled as the bass player. Rounding out the guest list was DJ Swiff on the turntables and Questlove on drums. White smoke filled the performance stage while red lights lit up the studio like lasers to add to the ambiance, but this crew needed no help to keep our attention. At one point Big Boi led Sleepy, Keisha and Scar in a circular two-step and broke out with a lyric from "Nothing But Love " by The Five Heartbeats for a rather entertaining addition to the song.

While we may have to wait until the 12th of never for a new OutKast album, we'll gladly cop Big Boi's Boomiverse when it drops this June to hear more jams like this.