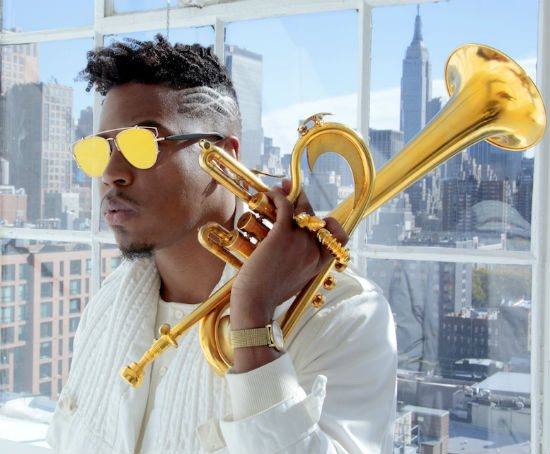 Two years ago, we hipped you to the jazz greatness that is GRAMMY-nominated trumpeter Christian Scott aTunde Adjuah, following his epic performance on NPR Music's Tiny Desk Concert Series. The New Orleans native continues to creatively push boundaries and challenge the confines of musical genres, coining the phrase “stretch music,” which he uses to describe his knack for incorporating trap music, R&B, funk, pop and jazz for a completely original and unique sound. This year, he’s promised the release of a three-album series collectively titled, The Centennial Trilogy, and he isn’t wasting any time making good on that undertaking. In March, he released the first installment entitled Ruler Rebel, and now he’s released the first single from the second album, Diaspora.

Also named "Diaspora," the breezy and vibrant tune, Adjuah partners with his frequent collaborator, flutist Elena Pinderhughes, who has quickly made a name for herself following her performance of the Metro Boomin'-produced hit “Mask/Off” at Coachella alongside Future. True to form, multiple genres are heard throughout the melodic track, including hip-hop-inspired drum kicks, classic piano riffs and dazzling jazz-centric horns. The talented musicians take turns serenading the listener the same way battling rappers would trade bars. Though the exchange is more soothing than a battle rap, it's just as intense. Both of the artists' imprints glide effortlessly over the track, and the two blend together seamlessly. As for the single's title, Adjuah says "We're trying to highlight the sameness between seemingly disparate cultures of sound as a means of showing a broader reverence and love for the people who create the sound and the experiences that lead them to those places."

Get your dose of this festive genre-fusion, and give the new single from Christian Scott aTunde Adjuah a spin. If you missed the first installment of The Centennial Trilogy, Ruler Rebel, you can purchase it on Bandcamp. Keep up with him on Twitter, Instagram and Facebook, and be sure to grab the second album in the series, Diaspora, upon its release on June 23rd.