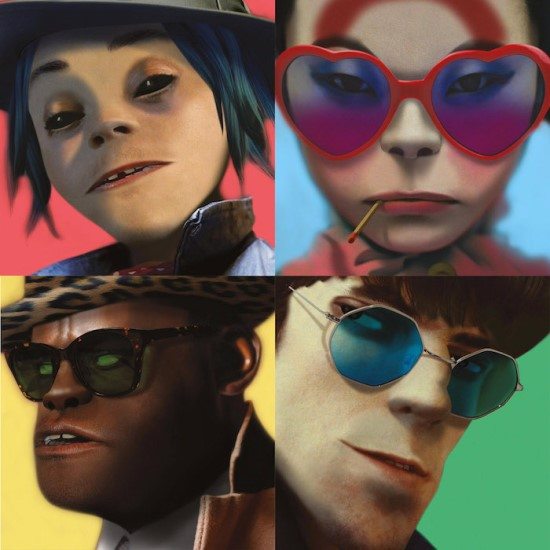 After a lengthy musical hibernation, alternative hip-hop/rock band Gorillaz is ready to welcome spring with a new album loaded with an eclectic array of guest features. But the project, titled Humanz, is just the first in a series of thirst traps that have kept fans buzzing with anticipation.

It all started last month when Gorillaz co-creators (musician Damon Albarn and artist/illustrator/director Jamie Hewlett) unloaded a hefty package filled with four new songs – "Saturnz Barz" (featuring Popcaan), "Andromeda" (featuring D.R.A.M.), "Ascension" (featuring Vince Staples) and "We Got the Power" (featuring Noel Gallagher and Jehnny Beth) – plus a video for "Saturnz Barz" (in both standard and virtual reality formats). Shortly after the quadruple song premieres, the band performed the whole album for a lucky London audience during a secret show. As if that wasn't enough to leave us good and happy (and possibly confused by that video), they released yet another new song, "Let Me Out" featuring Pusha T and Mavis Staples, earlier this month.

Now as the countdown shortens ahead of the April 28th release of Humanz, the band has surprised fans once again with the announcement of their first North American tour in seven years. In addition to the tour, Gorillaz has teamed with electronics company Sonos to create "Spirit House," an immersive pop-up experience that will hit New York, Berlin and Amsterdam in April and May. The exclusive series of events will offer "a place where fans can go deeper into the band’s dark, fantasy world and be dazzled by spectacular visuals." Admittance is free and fans can register for entry via Sonos.

But wait, there's even more. It seems the British primates are finally ready for their close-up with the shocking revelation of their first-ever live, on-camera interview. The televised event, hosted by BBC Radio 1 DJ and host MistaJam airs on April 20 at 10 a.m. EST/3 p.m. BST and will feature band members Murdoc Niccals and 2D as they answer listener questions submitted online. Fans can go to the live stream page to submit questions now.

The animated band is known for pushing the envelope and clearly still has plenty of special effects tricks up their furry sleeves. For now, you can pre-order the standard or deluxe version of Humanz through your favorite retailers and expect to hear cameos from Anthony Hamilton, De La Soul, Kali Uchis, Grace Jones, Carly Simon and many more. Afterwards, scroll down and listen to "Let Me Out," peep their "Saturnz Barz (Spirit House)" video (standard format), check the tour dates and visit the website for ticket purchasing. Make sure you keep up with Gorillaz on their social media pages, because at the rate they're going, you won't want to miss a thing.