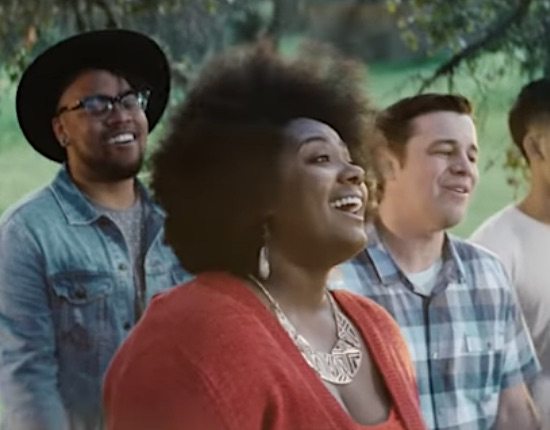 What the world needs now is certainly love, sweet love. Greek yogurt brand Chobani echoes this sentiment and features an original arrangement of the 1965 Burt Bacharach and Dionne Warwick classic in their new ad spot. The gleeful 30-second commercial entitled “Fruit Symphony” features vocalist Lydia René, backed by the We Are LA Choir and six actual Chobani employees. The brilliant ad exudes a calming sense of hope and unity as musicians, including Jon Brion who composed the musical arrangement, are seen playing an array of instruments made out of fruit using contact microphones and triggers amidst a natural backdrop of rolling hills and lush greenery. Brion, who co-produced Kanye West’s Late Registration as well as countless movie soundtracks, teams up once again with Academy Award-winning filmmaker Michel Gondry, who masterfully directed Dave Chappelle’s Block Party, for the project. The duo, whose previous work together includes the Eternal Sunshine of the Spotless Mind, make creative and innovative magic once again.

We were elated to spot singer/songwriter/pianist/actress Lydia René in the ad, as it has been nearly eight years since we first deemed her Bounce-Worthy in 2009. This marks her second national commercial since the release of her debut album Vintage Heart in 2015. She seems to be enjoying herself, especially being part of the “Believe In Food” campaign. She beams, “I had an amazing time working with Chobani and my amazing singing friends and (especially my husband Brian Vickers who directed us and taught everyone their parts!), as well as the musicians who actually played fruit instruments."

Chobani's “Fruit Symphony” commercial is airing on national cable networks now, and you can also check it out right here, too.